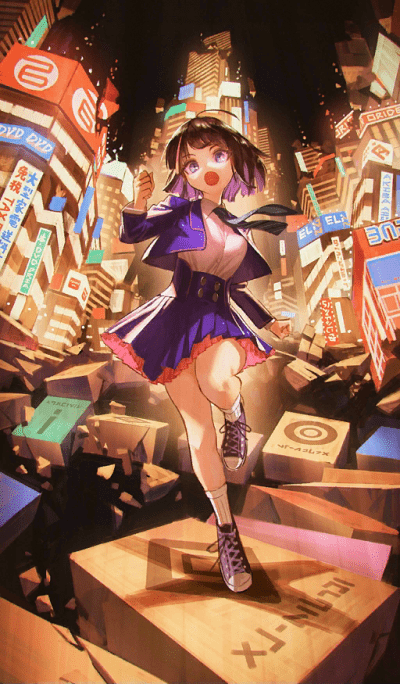 Erice Utsumi is the Master of Voyager "After" the Holy Grail War‎‎ in Fate/Requiem. As she lives in a resort town, she often wears a silver swimsuit and windbreaker while going around town. Erice's red lock of hair is actually a Mystic Code that works similar to a smartphone, allowing her to make calls and use apps. Erice has a scar from when she was a child, her grandmother gave her a haircut but accidentally cut her ear with the scissors, making her bleed. She's focused on efficiency. She likes functional and practical tools and clothes, preferring the simple but effective. Her favorite foods are the spicy and highly nutritional ones. She pretty much doesn't care about flavor. She loves finding a quiet place to read books, and she will not tolerate the mockery of Heroic Spirits. She does not like mages (likely due to her experiences with her grandmother Chitose) and says she is just a "magecraft user", but that's debatable. Erice greatly dislikes the Holy Grail War Tournament, as she sees it as simply exploiting the great heroes of human history. She dedicates all of her free time to checking books and documentaries related to Heroic Spirits. While she does leverage this knowledge to ruthlessly erase them as the "Reaper", she also pays a deep respect and regard for their previous lives. The ones she esteems the most are the voyager and adventurer Heroic Spirits who discovered worlds unknown. Of all explorers in history, she most admires Francis Drake. She thinks the rumors of Drake being a woman are impossible to believe, but also thinks that Drake's gender wouldn't matter anyway and being a woman wouldn't change what she did. Erice laments how humans in her time have no desire to explore space anymore. Erice secretly harbors resentment toward Masters and Servants, since she is the only person in the world who does not have a Servant. She compares living in her world without a Servant to being like if you had poor eyesight but were told you were not allowed to wear glasses, or being told you had to travel somewhere on foot while everyone else got to use trains or buses. When she spoke with Voyager while bathing him on the night they first met, she broke down wishing he could have been her Servant. After contracting with Voyager Erice becomes very possessive of him, referring to him as "My Servant... my, mine, only mine, and no one else's". In Fate/Grand Order she becomes angry and upset when she thinks Ritsuka Fujimaru stole Voyager from her. Erice has trouble trusting little boy Servants because of an encounter she had with Avenger Louis XVII when she was younger, who used her trust and friendship and turned it against her. Her best friend Karin is irreplaceable to her, and Erice feels that if one of them ever lost the other, that would be the end. Often Karin's emotions will flare which will lead to a fight with Erice, but neither girl ever lets it stay that way. To Erice, the idea of romance is an unexplored continent that lies beyond her understanding, and something that could be even more dangerous than a Servant gone insane if one was not careful. She is surprised when Karin starts flirting with Kuchime, as she thought that Karin felt the same way regarding romance. The French children's book The Little Prince is important to her somehow, and she owns both a pair of aviator goggles and a replica toy of the airplane which its author Antoine de Saint-Exupéry flew. The model was a gift from her father. She thinks her teacher Caren Fujimura having her underwear exposed instead of wearing a skirt or pants is cool. She greatly admires Caren and refers to her as her master, having known her for as long as she could walk. Erice doesn't think highly of otaku culture, although in her world that is not nearly as common in Akihabara as it used to be. When she entered a hobby shop to try and figure out what kind of things Voyager enjoys, she describes herself as almost sick of looking at all the merchandise and the figurines of buxom women. Erice is unable to cry. She can still feel sadness and fear and other emotions one normally associates with crying, but says that she "doesn't know how to cry." Even the incident with Louis XVII and the death of Caren didn't prompt tears.