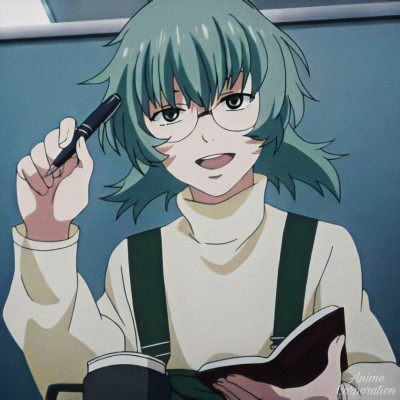 Eto Yoshimura is the founding leader of Aogiri Tree, having formed the organization in the decade between her original rampage and the beginning of the series. While speculated by many to be the One-Eyed King, she claims that this is not the case. Instead, she is the One-Eyed Owl, the half-human and half-ghoul daughter of Yoshimura and Ukina. Her human identity is Sen Takatsuki, a best-selling horror novelist mentioned throughout the series. After the Third Cochlea Raid and her defeat by Kichimura Washuu, she was captured and used as the main body for the Taxidermied Owl. She managed to retrieve herself from the body and returned to life. Eto is a short woman in her mid-twenties with a sleepy or curious expression. Her long green hair is usually messy or on top of her head in a bun, complementing her modest or sloppy fashion. Though she is typically unkempt, she is noted to be an incredible beauty with many admirers and greatly resembles her mother, Ukina, this resemblance deepens when she later cuts her hair into a short bob. While active in Aogiri, she wraps her entire body in bandages, doubling as a concealment to keep her identity secretive. Over it she wears a maroon hooded cloak with droopy ears and a floral scarf around her neck. Her right eye is a kakugan, while the other eye is a tone of light green. Eto has a sadistic personality, often expressing joy at the expense of others' suffering. She has no qualms about remorselessly slaughtering humans and ghouls alike, and shows happiness when inflicting pain on others. Like her mother, Eto has a very sharp intuition about the feelings and desires of people, which she exploits to the fullest when dealing with her victims and manipulating others to do her bidding. Her twisted personality is possibly the result of fighting to stay alive during her early years in the 24th ward. Like many ghouls, she is able to compartmentalize her ghoul and human alter egos with relative ease. As Sen Takatsuki, she is quite playful and scatterbrained at times, oversleeping on the day she was supposed to be signing books and taking photos with admirers when it was prohibited by her manager. According to the profile Haise Sasaki constructs through his analysis of her works, the author is a woman filled with despair and hatred towards the world, having completely abandoned hope long ago. While mostly true, she strongly believes in creating a society where ghouls will not be persecuted for existing and will do anything to fulfill this ambition, regardless of what she has to sacrifice.