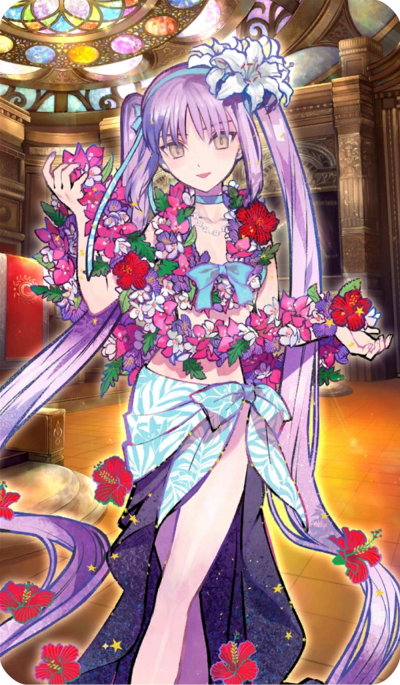 Euryale, Class Name Archer, is an Archer-class Servant summoned by Ritsuka Fujimaru in the Grand Orders of Fate/Grand Order. Euryale and Stheno are identical sisters called the "snow-white Gothic Lolita duo." Her weight in Fate/Grand Order comes from a report from Medusa. Euryale was pictured as the "ideal girl", displaying a carefree demeanor, an overflowing smile, and the essence of purity in her actions and words. It is said that men will tremble in honor and swear to protect her at the cost of their lives should just their names pass from her lips. Unlike their younger sister who is an expert in fighting and disliked humans, she and Stheno perfect themselves as idols who liked humans, welcoming the men visiting the island, comforting them, and sending them on their adventure. Though her image on the surface seems to paint that as the very meaning of her existence, that is only to those observing them from afar. She is a devil who loves everything pretty and cute, freely and unconditionally. A "cute young girl" who thoroughly behaves like a spoiled child and makes men care about her.[2] While she loves humans, it is not as "living beings", but rather in the way of toying with those she likes, embarrassing and driving them to ruin while watching them struggle. In reality, they truly hate men, while their sister is the one who bares them no ill will. They, loved by men, should be destined to be violated by them day after day. Though she despised her fate, Euryale had given up until Medusa became the one to protect them. Due to the "irregularities" caused by Medusa's growth, she would describe her older sister as the "ultimate display of mood swings." As the "impish, cowardly second sister", she would slyly say "If you keep quite, no one will be mad, and if they don't find out, then there was nothing wrong, hohoho." She will only feel slightly guilty sometime later. She loves to tease and belittle Medusa, but does deeply care about her. Along with her sister, they like to suck her blood, noting that it is extremely sweet. Due to remaining the same as her sister eternally, they have a closer link than even telepathy, like two parts of the same body who share the same senses, feel everything the other does, and share the basics of their personalities. They will often speak as if they are one person, using singular pronouns to describe each other. Although she is in fact endowed with purity and chastity, if one were to get to the core of her character, it is also possible to say that she is a sneaky, moody person. Nobody will be mad so long it is kept quiet, it is not trickery if it is not exposed - she possesses such mentality (however, she will suffer with self-loathing later).