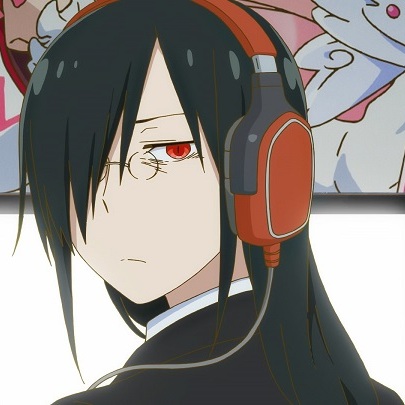 Fafnir or Takeshi Ooyama is a supporting character in the Miss Kobayashi's Dragon Maid series and the main protagonist of Miss Kobayashi's Dragon Maid: Fafnir the Recluse. He is Makoto Takiya’s roommate and friend. In his human form, Fafnir appears as a handsome young man with long, straight black hair in a loose ponytail with bangs covering his right eye with small glasses on the bridge of his nose & red eyes, which can change color and size depending on when enraged. He has a calm, collected demeanor that reflects his slightly gloomy face. He is mostly seen in his butler attire and a mail coach cravat tie. When Fafnir is in his dragon form, he appears as a towering dark dragon with several thick, smooth tentacles instead of legs, with the two longest ones working as a tail. He has large dark wings with a feathery appearance. He has a long snout, a circular mouth with two vertical rows of fangs and has three pairs of pure red eyes. He has four horns, two smaller horizontal ones on top and below them two thicker horns that curve forward to eye level. He can also transform into a monstrous humanoid form with purple skin, a bulky upper body, red eyes and two of his four dragon horns and a large multi-row fanged mouth. At the beginning of the series, Fafnir abhorred humans for everything they were. As the series goes by, his heart warms up to a human with similar interests and takes on a sensei-student style friendship with Makoto Takiya. His hatred for humans turns into more of an indifference to them, and more of a pain to get to know them rather than just kill or ignore them. He appears to dislike spicy food, as when Takiya made some curry, he asked if it was "mild" and refused to eat Tohru's soup after learning that it was spicy. He became extremely attracted to video games and other Otaku interests since his lifestyle of a cursed dragon can easily accommodate it. He is hardworking and diligent in his passions, as seen with his multiple all-nighters to play games (dragons don't need to sleep to stay healthy and active). Fafnir is shown to be fairly greedy, as, in a videogame, he went for the treasure chest (which was a mimic), ignoring Takiya's warnings not to do so.