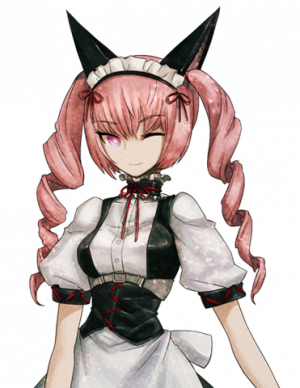 Faris NyanNyan, real name Rumiho Akiha (秋葉留美穂), is a part-time employee and owner of the maid cafe MayQueen NyanNyan, the same maid cafe that Mayuri works at, and is the most popular waitress there. She is a second-year student in Kanaria Private Academy and is Yukitaka Akiha's daughter. Faris is a very short girl with long pink hair and pink eyes. She prefers having her hair tied into two drilled pigtails rather than having it down. She is usually seen wearing her work uniform, a maid outfit with a head dress, apron with a ribbon at the back and black leggings with black shoes. She also has a redish ribbon around her neck and on the sides of the head dress. She has a wristband that is black with white frills to go along with the frills on the skirt. Her casual outfit consist of an amber dress and a black tiara. As usual, she ties her hair into two braids and she doesn't wear the cat ears. Being the waitress and owner of a moe cafe, Faris would always adds "Nya" to her speech as to boost her "moe-ness". She has an ability to see into people's hearts just by looking into their eyes, which she calls the "Cheshire Break". She likes to play along with Rintaro's delusions and comes up with scenarios herself. Faris is one of the few people who does not think of Rintaro as "weird". Her true personality is of a childish and self-conscious girl who really misses her father and longs for intimate interactions with those close to her. She does not often show her darker, more complex side to others, instead hiding behind exaggerated and simplified personas such as 'Faris NyanNyan'; this is one of the reasons she gets along so well with Rintaro. In addition to raising her likability, this facade allows her to disengage emotionally from potentially troublesome situations and protect herself from getting hurt. As a child, Rumiho dreamed of one day opening her own maid cafe. She begged her father constantly, to no avail, though exactly why he wouldn't let her is never made clear. Ten years before the beginning of the story, to celebrate her eighth birthday, she had her father make a promise to drop work and join the party, but he ultimately cancelled because of a business trip. This made Rumiho really upset and she took it out on him, that she accused him of loving his job more than he loved her and told him she wished he was dead. Grief-stricken, her father decided to take an early flight back, and, in a painful case of irony, died in a plane crash. With her father gone, Faris was free to establish her maid cafe, but she always felt deep grief over his death, especially since the last thing they did was fight.