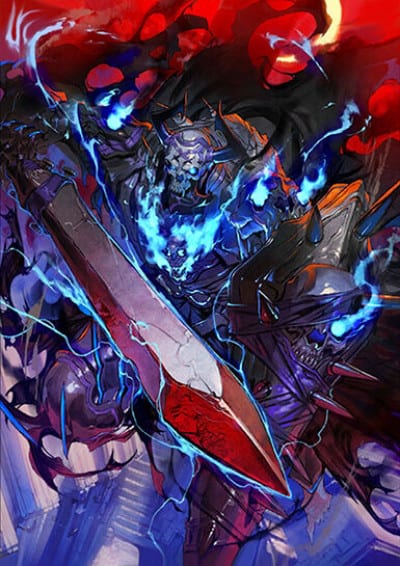 "Old Man of the Mountain", Class Name Assassin, is an Assassin-class Servant summoned by Ritsuka Fujimaru in the Grand Orders of Fate/Grand Order. He was Grand Assassin until he removed himself of his rank of "Grand" during the battle with Tiamat. His main outfit consists of a thick purple and black helmet with a skull shaped visor, hiding his face behind it at almost all times and showing nothing but empty blue pupils. He wears a bulky purple and black cuirass with a skull on it, with eerie blue flames pouring out of the eyes. His plackart is designed to represent the ribs of a skeleton. He has large, durable faulds protecting his hips from damage, with a design that represents a skeletal hand wrapping around his waist. He has black and purple cuisses with glowing blue lines running through them, and spiked poleyns on his knees. He has extremely durable greaves protecting his shins, and thick sabatons protecting the boots he wears. He has large, skull shaped pauldrons on his shoulders with infernal blue flames coming from the eye sockets, black rerebraces, purple vambraces with large spikes and blue lines running through them, and purple spiked gauntlets. On his back is a seemingly ancient mantle, with a cape that looks just as old and worn. The Old Man of the Mountain comes off as quite the stern and straight-forward individual. He possesses extremely low tolerance for impoliteness, as he almost immediately annihilated the protagonist's group upon their uninvited visit to his temple. However, he is far from being heartless, simply a man with unshakable faith and strict code of conduct. He was willing to hear his visitor's plea for aid and accept it, but only on the condition that one of the Hassans be willing to die for it. In his view, for a Hassan to plea for aid, even from their own kind is a grave dishonor to their name and faith, as they are those who must rely on their own individual strengths to preserve through trials and slay their targets. Any Hassan who grows weak and/or becomes reliant on the strengths of others must be dealt with by his blade. Due to his fiendish outward appearance​ and fierce manner of fighting, he's pictured with a ruthless nature, but the individual in question is just silent, with a noble disposition that strictly adheres to the Lord's teachings. Well-versed in both the law of men and the law of God, he perceives "the suspension of life activities" and "the end of life" as different things. By God's will, the soul is brought salvation at the end of one's life. As long as they don't go against the teachings, this individual will be the ally of a righteous person. However, since he absolutely won't show any mercy or consideration, he'll spread fear and dread in battle as if he was the Grim Reaper itself. It is rare for him to say anything, however his intention will be clearly conveyed. When mad, the (skull's) eyes will shine. When sad, the eyes will shine. Even when pleased, the eyes will shine. No matter what, the eyes will shine. He holds no interest in the other Heroic Spirits and he does not convey his views, thoughts and desires to others. However, towards the other Hassans, he becomes a strict Senpai to the point of being relentless.「Cursed Arm. What didst thou seek to grasp, to the extent of obtaining that devil's arm? Thine own foolishness? Very well, hand over thy head.」「Serenity. What hast thou protected with that body soaked with poison? A loneliness that could not even protect a flower blooming in the wilds? Such idiocy. Hand over thy head.」「Hundred Faces. What hast thou accumulated with thy countless knowledge? A desire to contend thy hundred souls for a single truth? How shallow. Now, hand over thy head.」No matter what you do, your head will be lopped off.