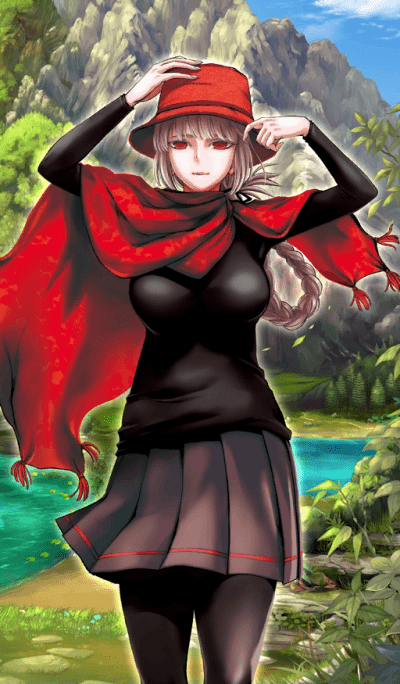 Florence Nightingale, Class Name Berserker, is a Berserker-class Servant summoned by Ritsuka Fujimaru in the Grand Orders of Fate/Grand Order. Nightingale has long braided sliver pink hair and red eyes. She wears a red coat and a black skirt with res trim, with white boots and gloves. The Angel of Crimea that makes the attendance of and dedication to the sick, injured, and dying into her creed. A woman of conviction. Before all imnumerable difficulties, Nightingale will never bend from her beliefs. Her only one ideal behavior is saving people. The owner of a tenacious mentality that never becomes disheartened and speaks words which should be said, heedless of whoever it is for—even if it is to the monarch of the British Empire. Her nickname is "Little War Office". The owner of a persistence that could also be described as a one-woman army. Because of her present manifestation, she is in a condition in which said mentality is combined with an EX Rank Mad Enhancement Skill, unlike what she was in life (probably), and as such, "she does not listen to people at all." Nightingale speaks with a composed expression, but it is difficult to come to a mutual understanding since that is all her "speaking to herself." For Nightingale, whose existence is consolidated to the single point of always saving a person, she doesn't cleanly recognize her Master. While she vaguely recognizes the "commander of her own army", she would relentlessly says things like "You should improve your sanitation" and "Do you intake enough nutrition?" (However, she doesn't listen to the replies. She wants to do: Rescue operations, nursing, sanitation improvements, and so on.) Nightingale believes that pain is the proof of one's continued existence. She takes joy in nursing others, but will be sad if all her nursing efforts gets erased the moment her patients gets into harm's way. Thus she requests her patients to not overdo their work and exertion. She likes maintaining sanitation and cleanliness and the overall well-being of people, while she dislikes an unclean, decaying environment, as well as injuries and sicknesses. Regarding the former, she asks "Is there anything else that's essential in this world?", while for the latter, she questions "What can be worse than such hell on this earth?" Perhaps due to the era she lived in, Nightingale believes that magic is part of the occult and that medical treatment doesn't need to be done with magic or anything associated with the occult for that matter.