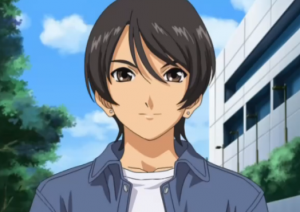 Fujimi Chihiro is the owner of Whirlwind, and also the former president of the Motor Club. Chihiro first appears when Keiichi and the rest of the Motor Club were designing a miniature motorcycle. Chihiro came in, and when she realized that Keiichi was the new director after Tamiya and Otaki, she challenged him to a race with miniature motorcycles. Despite appearing to harbor an extremely competitive and relentless personality, Chihiro appears to be an extremely kind young woman, and never hesitates to help a friend in need. She is quick to reveal her feelings, shown by her openness with Belldandy upon first meeting her, although this can arguably be attributed to Belldandy's calming personality. Later, it is revealed that after a treasure hunt turned up two rings that Tamiya and Ootaki were in love with Chihiro at one point. Chihiro turned both of them down, for the good of the club. When Chihiro first enters the story, she is working at a race track with a team of her own, building powerful machines for a company. However, despite the fact that it was once her dream job, it is apparent that she does not enjoy it as she once did. After defeating Keichi in the miniature motorcycles race, she quits her job to pursue her true passion in life. Later, Chihiro opens up her own shop called Whirlwind. After it officially opens, she employs Keiichi, and eventually Belldandy. Whirlwind is the same trailer that used to house the Motor Club, which was moved to the Four Wheels Club's former dwelling. She also has a very deep weakness for cute things, such as toys, children, cute cars, and pets. Her primary mode of transport is her Krauser Domani SSi.