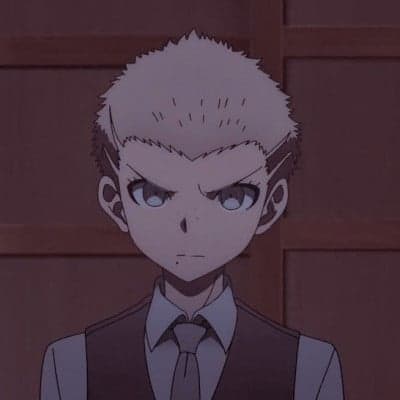 Fuyuhiko Kuzuryu is a student of Hope's Peak Academy's Class 77-B, and a participant of the Killing School Trip featured in Danganronpa 2: Goodbye Despair. His title is Ultimate Yakuza. Fuyuhiko is initially incredibly stand-offish and rude to the other students on the island. He claims he's not going to play at being friends with anyone, and when he is questioned about this, he states clearly that he would not hesitate to kill anyone of the others. He makes frequent references to his yakuza background and seems adamant at presenting this sort of "lone wolf" attitude. Fuyuhiko doesn't simply want to make friends but considers it not worth his time and beneath him. Despite this, as early as chapter 1, he shows signs of this perhaps not being all true, with him "happening to walk by" the lodge where the other students were having a party, despite claiming that he had no interest in going. After deciding to change in Chapter 3, because of Peko's sacrifice and him realizing his own mistakes, Fuyuhiko became more sociable and avoided bad-mouthing people to the best of his abilities. He even seems to become one of the group's most loyal and steadfast members, though still short-tempered and impulsive. He tries to help others and is shown to openly care about them. In his free-time events, Fuyuhiko is revealed to have self-esteem issues concerning his status as the Ultimate Yakuza and the clan's heir. He does not believe he deserves the title, though he grows out of this with Hajime's company. He states that he wants to be strong on his own, and not to simply rely on his family's power to get ahead in life. His goal is to be strong enough to lead his family, rather than to be strong because he leads his family. Because of his insecurities, he is also particularly sensitive about his appearance, as people would expect a big, muscular man to lead a yakuza family, and Fuyuhiko's appearance is the opposite of that. It is suggested that it would not be out of the question for him to react violently if someone were to use the word "baby face" in reference to him. It's also revealed that Fuyuhiko enjoys eating sweets, such as fried dough cookies, which he considers unmanly and shameful and thus tries to keep it a secret. He is also ashamed because he doesn't have any tattoos like "real yakuza" do. Fuyuhiko takes duty very seriously, and if there's someone who he can trust, he will open his heart and cooperate with them. Despite being a yakuza, deep down he has a somewhat pure heart and he's very strict to the rules. He is the type who takes honor and moral codes seriously.