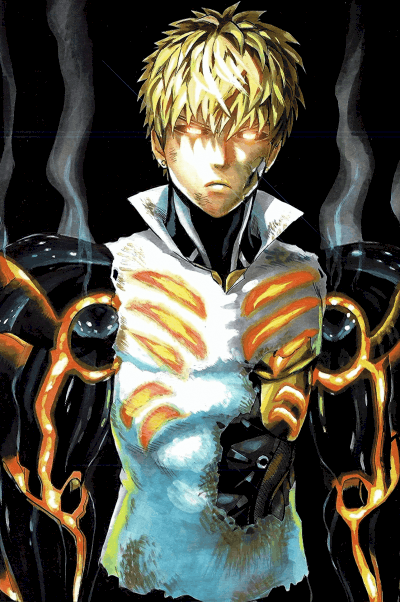 Genos is the deuteragonist of One-Punch Man. He is a 19-year-old cyborg and the disciple of Saitama. He is always aiming to become more powerful and fights for justice. Under the Hero Association, he is given the name Demon Cyborg and is currently S-Class Rank 14. Genos is a mechanical cyborg of average human height. His face and ears look like that of a normal human, made of artificial skin material, and his eyes have black scleras with yellow irises. He has spiky blond hair and his eyebrows are blond (brown in the anime). He also has pierced ears. Genos's wardrobe consists of normal street clothes with all of his upper-body attire being sleeveless as to allow his arms to transform without hassle. He has been shown to have many different sets of arms, with varying abilities and strengths. Notable examples of his various "arms" are those he used in his sparring match against Saitama and the arms he equipped to combat the meteor. Sometimes the arm sets he uses create a metal framing around his face, like when utilizing Arms Mode and in his Monster Association Arc Upgrade. Genos is an extremely serious character, rarely if ever making jokes. He constantly strives to become stronger and frequently looks to Saitama for advice to achieve his goals. Since becoming Saitama's disciple, Genos is very reverent and protective towards Saitama (who he refers to as "master"). Genos envies and reveres Saitama, although this does not stop him from expressing annoyance and disbelief at the mundane training regimen Saitama used to gain his powers. On occasion, Genos acts as a comic foil to Saitama's clueless antics, using a variety of special techniques, battle tactics and robotic upgrades to combat villains (often sustaining terrible damage in the process), only to be outclassed by Saitama with a single punch. Due to Saitama's incredible strength, Genos believes that there is a secret to Saitama's power. He is motivated to observe Saitama closely in order to understand the secret to his master's incredible strength. Genos is an intense person, unyielding in his pursuits. Before meeting Saitama, he was even more intense but Saitama has been a moderating influence on Genos, helping him to be calmer and take a more measured approach to his pursuit of justice and power. Genos realises how far he's come when he witnesses Sweet Mask dispatch a group of alien prisoners without mercy and remarks how similarly hard-hearted he used to be himself. Genos has slowly become less serious and becomes a bit curious about some minor things such as the meaning of fun. Genos fully respects two people Saitama, and Dr. Kuseno (the man who saved him). He extends professional respect to those who demonstrate genuine expertise, like Bang and Bomb, and tolerates people who Saitama willingly spends time with, like King. He is rather disrespectful to almost anyone else, especially those who attempt to interrupt, or pester Saitama. Whenever Bang or Fubuki command him or attempt to recruit Saitama, Genos will cut them off and tell them to get to the point. He will defend his position as Saitama's disciple, actively discouraging Saitama from letting other people get too close. This hostile behavior does not only extend to those who offend Saitama, but Dr. Kuseno as well. Genos has even called out Saitama when he called Dr. Kuseno an old man, but he immediately apologized when his master told him to give it a rest. He also does not respect the authority of the Hero Association very much, telling Sitch that even though he wasn't part of the main task force team to invade the Monster Association that he would have gone anyway, and states that none of his decisions have anything to do with the Hero Association. Genos appears to take a certain pride in his abilities and himself. In his battle against Awakened Cockroach when he is aggravated that he had to use his instant adhesive gel, as it forces Genos to accept there were monsters faster than him. Nevertheless, his fights with G4, Face Ripper, Awakened Cockroach, and Garou demonstrate that he does not solely think about raw power and is willing to fight strategically if need be. Genos was also a serious person before he became a cyborg, being described by ONE as having been a diligent, responsible boy from the start.