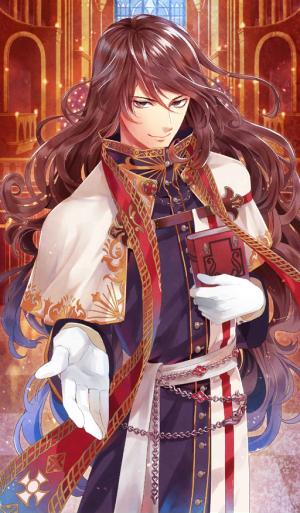 Georgios, Class Name Rider, is a Rider-class Servant summoned by Ritsuka Fujimaru in the Grand Orders of Fate/Grand Order. Georgios is a tall man, apparently in either his late 20s or early 30s. He possesses brown eyes and long hair of the same color that reaches his waist. His knightly armor is of a brozen-orange colour, covering from his neck to his feet. By the looks of his feet armor (and later additions to the armour through Ascension in Fate/Grand Order), it appears to be dragon-themed, reflecting his ability to bestow the Dragon Trait to others through one of his Noble Phantasms. Portions of his armor, mainly the left side of his torso, are covered by a white garment with a red, vertical stripe on it. He wears a white cape, tied around his shoulders by a brown, leather belt, with a red horizontal stripe drawn on it. He appears to possess a second layer of clothing underneath the white garments with the same shape, but coloured red instead. His sword, Ascalon, is a double edged-weapon with a white blade and a golden hilt. In his first Ascension, his appearance is as described above and is the one that most closely resembles his deisgn in Fate/complete material IV Extra material. In his second Ascension, a piece or armor is added to his forearm, along with a dragon head-shaped piece to his left shoulder, in addition to a red sash attached to the new shoulder piece, besides his cape. In his third Ascension, three more sashes are added to his outfit: two red, thin, long sashes, and a single one, also red, but shorter, wider, and with a white stripe running down the middle. In addition, his Noble Phantasm Ascalon changes its shape to a thicker, weapon, the top ending in a diagonal line, blades still white but the middle portion black, with a golden line running down to its now black hilt, ending as a golden logo at the bottom. Georgius is an upright man who tasks himself to protect the meager, indiscriminate in his kindness. It is his firm belief that anyone is capable of error, and that anyone is capable of learning from their mistakes and returning to path of virtue; those who would oppress others and permit violence to rule their hearts and actions have merely fallen prey to their own weakness. On his watch, however, none shall be permitted to injure others; and if necessary, his sword shall be drawn to intervene. A lover of travel, he has recently grown interested in the cameras of the modern era.