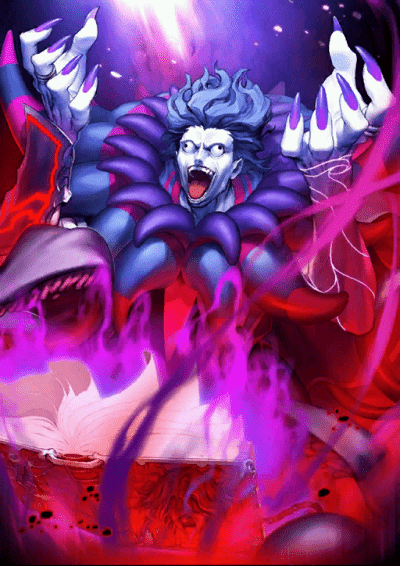 Gilles de Rais, Class Name Caster, is the Caster-class Servant of Ryuunosuke Uryuu in the Fourth Holy Grail War of Fate/Zero. He is one of the Servants of Ritsuka Fujimaru of the Grand Orders conflicts of Fate/Grand Order. A young face without a single crease yet. He has huge, rolling eyes and oily, glistening cheeks. Because he was originally a knight, he has a muscular build and is a very tall individual. Along with the deathly pallor of his face, he reminded Ryuunosuke of a painting from Munch. Those abnormally big eyes easily remind one of nocturnal animals. His garments too were quite odd and were definitely queer] A luxurious robe of ancient design; sanguineous scarlet patterns adorned the pitch-black fabric. He donned an inky black cassock, and an evil aura reeled about it. Also, the patterns dyed crimson red on the cloth was as if stained with blood. His figure, tall enough to reach the clouds, was wrapped in a much-folded robe, decorated with luxurious latches made of precious metals; his whole style looks exactly like some "evil magician" from a manga. When silent, his features would look dreadful like the face of a corpse, but when smiling without any apparent maliciousness, he would seem as pure as a saint. He has a cracks on one of his hands. He usually has a scorn on his face, unless he's having fun torturing and killing people. Caster is a troubled person, having lost the woman he admired. Like his Master, he is almost devoid of any morality, and wishes to use the Holy Grail to revive his lost love until he meets Artoria. Caster initially expresses an interest in Artoria, appearing to be familiar with how she came to ruin at the end of her life. In truth, it is because he has mistaken her for Jeanne d'Arc, whom he had been infatuated with when alive. Even after Artoria reveals her true identity, Caster continues to delude himself, believing that her memories were warped by the trauma of her death. He even makes plans to capture Artoria and force her to remember her 'true' past. He enjoys offering his victims brief moments of respite, or even the hope of release or escape, before inflicting death through gruesome and horrific means. According to Caster, allowing his victims' hope will amplify the despair and terror upon their moment of death, a fact that he revels in.