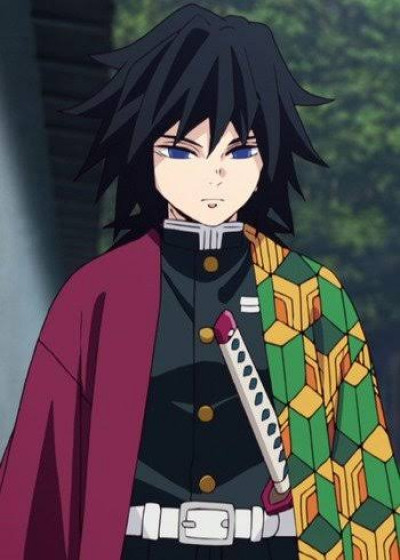 Giyu Tomioka is a major supporting character of Demon Slayer: Kimetsu no Yaiba. He is a Demon Slayer of the Demon Slayer Corps and the current Water Hashira. Giyu is a tall young man of a muscular stature and pale complexion, who is almost always seen wearing an unimpressed or emotionless expression. He has unruly black hair of uneven lengths that sticks up in tufts around his head, which he wears tied back in a low messy ponytail at the base of his neck. His bangs fall over his eyes in an uneven fringe. His eyes are sharp and reasonably thin, their irises a deep sapphire that fades to a lighter blue and their pupils a bluish-black, and are framed by thin eyebrows. Giyu wears a dark cyan-tinted version of the standard Demon Slayer uniform with buttoned white leg-wraps and a pair of white zōri with dark blue straps, the socks underneath the same cyan color as his uniform. Over this, Giyu wears a haori that's split down the middle into two different patterns: the right one a solid pink-red and the left one geometrically patterned with squares of green, orange, and yellow. These haoris were later noted to have belonged to his late older sister, Tsutako Tomioka, and his deceased friend Sabito. During his battle with Muzan Kibutsuji, he loses his right arm. After the fight, Giyu cuts his hair down to shoulder length, now wearing it loose rather than tied into a ponytail. Giyu always wears a serious expression on his face. He has a reserved personality and a strong sense of justice with no tolerance towards those who don't know their own limitations and throw away their lives. Despite letting Nezuko Kamado live due to Tanjiro Kamado's persistence, he shows zero hesitation when killing other Demons and has no respect towards them like most Demon Slayers. Even so, Giyu violated the Demon Slayer Corps' code of conduct when he protected Nezuko during Shinobu's attempt to kill her. This implies that he doesn't completely despise Demons as some other Hashira do, and is willing to make an exception for a Demon by letting them live if they don't kill and eat humans. This shows that he is more pragmatic in dealing with Demons rather than out of hatred for Demons like some other Hashira do. Giyu appears to have a complex with what others think of him and is shocked when Shinobu Kocho claims he is hated by many. Besides that however, he doesn't seem to be hurt by Shinobu's other pokes, even ignoring her. Despite that, they are in fact decent friends with a good amount of history together. He is a man of very few words and has trouble interacting with others, so he usually keeps himself at a distance. He even goes out of his way to tell Akaza that he hates talking, and wants to keep his name to himself, as he thinks names are not meant to be shared. It is revealed later on that Giyu suffers from an inferiority complex which he developed since his participation in the Final Selection. It gets severe to the point where he contemplates abandoning his position as the Water Hashira until Tanjiro helps him realize that instead of acting on his survivor's guilt, he should cherish his life and live on for the people who sacrificed their lives for him. This feeling of survivor's guilt strikes again when he believes Tanjiro has died after the fight against Muzan. Giyu, while he sheds tears, admits how he is always the one who is saved. Despite his aloof and stoic nature, Giyu is shown to be protective and caring towards those he is close to and considers his friends. This is first shown when he puts his life on the line for Tanjiro and Nezuko by vowing to commit seppuku if the latter were ever to eat a human. Giyu has been shown to lose his composure and usual stoic demeanor when those he cares about are in danger, as seen when he is greatly angered by Akaza's attempt to kill Tanjiro and visibly shocked when he hears the news of Shinobu's death. This is further shown in the fact that he still wears half of Sabito, his late best friend's, and his older sister's haori as a memento of them. However, Giyu appears to be particular in who he shows emotions for, as he doesn't appear to react at all when informed of the passing of Genya Shinazugawa, Muichiro Tokito and Kyojuro Rengoku. However, Giyu will not let his personal relationships get in the way of his duty. When Tanjiro begins his assault as a demon, Giyu is the first to announce that they need to take him down, despite his brotherly-type relationship with Tanjiro. Following this whole conflict, its clear that Giyu has been able to embrace his happier side, shown by his smiles towards the Kamado siblings and even Sanemi, which shows how much their combative relationship has slowly developed into one of mutual respect.