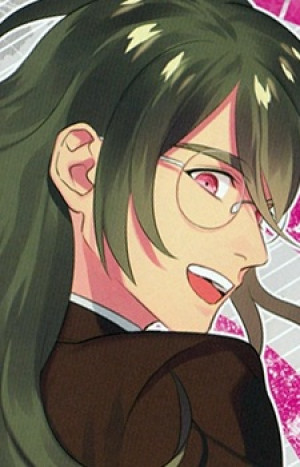 Gonta Gokuhara is a character featured in Danganronpa V3: Killing Harmony and a participant of the Killing School Semester. His title is the Ultimate Entomologist. Gonta likes animals very much, especially insects, and he can even speak with them. He is a kind-hearted, gentle, and polite person. He is very pure and naive, as he easily believes strangers and can get easily discouraged by other people's comments. When he is accused of being the culprit, he answers with complete honesty even if it makes him look much more suspicious. He also does not seem to understand sexual matters very well, as after seeing half-naked Miu he states he got a "weird feeling", and he assumes being "horny" means something like having horns on your head. Even his uncharacteristic "keep you up all night" line during the Love Suite scene appears to be a case of misinformation. He himself acknowledges and often points out that he is dumb, which is one of the reasons why he listens to other people so much. Naturally, he strongly dislikes killing and cruelty, which can rather easily make him cry. However, despite his gentle nature, he can turn very angry if he sees or hears someone hating on insects, and he believes bug lovers can't be bad. Due to his strong love for bugs, he is often seen searching and yelling for them to come out, claiming that he wants to talk with them. In order to repay his woodland family, he aims to become a true gentleman. Gonta wants to be useful to others, but he prefers not to do physical fighting and violence. He also gets very ashamed of himself if he does something a gentleman wouldn't do, like telling lies, losing his temper, making rude assumptions, seeing someone naked or half-naked, or accidentally touching someone inappropriately. It's noted that he isn't very gentlemanly yet, as he's a bit clumsy and sometimes gets controlled by sudden and strong emotions (which is implied to be a result of being raised in the wild), but he tries very hard. He occasionally gets very scary with intense expressions, especially when talking about bugs or if he is otherwise upset or frustrated, making other people afraid. He sometimes does not seem to notice that he is unintentionally scaring others, while during some other moments he can be very perceptive of others' feelings. He sometimes fears he might never become a gentleman and he can be very hard on himself. He doesn't seem to acknowledge many of his past or current accomplishments, thinking they're just some things all gentlemen would have done.