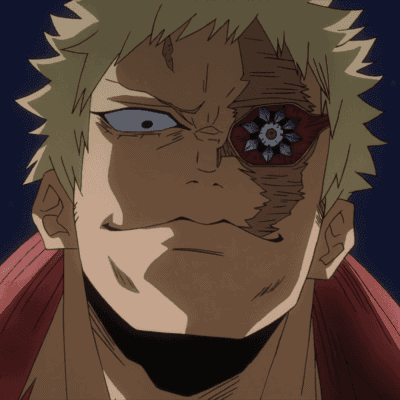 Goto Imasuji, also known as Muscular , later Jailbreaker, is a villain affiliated with the League of Villains as part of its Vanguard Action Squad. He and the rest of his squad serve as the primary antagonists of the Forest Training Camp Arc. He was incarcerated in Tartarus, until he was freed by All For One. He proceeded to go on a spree of destruction. However, after being defeated by Izuku Midoriya, Goto was arrested and imprisoned once again. Goto is a large, bulky, and extremely muscular man set wide with short, spiky blond hair and small black eyes. He has a large scar going across the left side of his face, his left eye replaced with a prosthetic one, and he has another, smaller scar on the right side of his forehead. As of his appearance after the Paranormal Liberation War, Goto's hair has grown longer and he has developed stubble all over his chin. His outfit consists of a black, hooded cloak and a white hockey mask with multiple holes. Underneath this, he wears a red tank top, a dark jacket that hangs around his waist, dark green pants, and black knee-high boots. Befitting his appearance, Goto has a very sadistic and bloodthirsty personality. He openly admits that he wants to use his Quirk freely to kill. Goto enjoys killing and tormenting those he fights, often saying "show me your blood!". Unlike most of the other members of the Vanguard Action Squad, he joined the League of Villains just to let loose with his brutal tendencies, rather than following Stain's ideology. Even so, Goto does have ideals of his own. He believes that people should deliver on whatever promises they make to others or else their words mean nothing. To him, "right" and "wrong" are determined by one's ability to accomplish their intentions. When he fought Water Hose, he viewed it as a battle of wills between his intent to kill and Water Hose's intent to stop him; as he was victorious, he was right and Water Hose was wrong. Conversely, Goto accepts the loss of his left eye as the result of Water Hose's intent and bears them no ill will for it. He even spoke highly of the heroes to their son. Goto's signature trait is his overconfidence which later proved to be his greatest flaw. Goto believed himself superior to Izuku Midoriya because his Quirk's augmentation powers were more potent than Izuku's. This superiority complex resulted in Muscular using only part of his power to toy with Izuku. His overconfidence is also what caused him to become distracted during their fight. Izuku was able to land a powerful smash against Muscular on two separate occasions because he allowed himself to be distracted by Kota Izumi. Despite his ego, Muscular does compliment Izuku's strengths. After getting hit by a full-power smash, Muscular admitted Izuku is powerful and decided to stop holding back. However, this never stopped him from taunting Izuku during their bout.