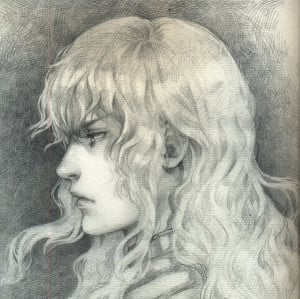 Griffith is the current leader of the reborn Band of the Falcon and supreme commander of the Midland Regular Army. As the "Falcon of Light", he has been at the fore of many battles, having amassed a reputation as a savior across the continent. As the leader of the original Band of the Falcon, he and his mercenaries are able to end the Hundred-Year War and bring peace to the war-torn kingdom of Midland. Following the desertion of his most trusted confidant Guts, Griffith beds Princess Charlotte on impulse, bringing about his imprisonment, year-long crippling torture, and the seeming demise of his dream. Though he is eventually rescued by the band, his state of extreme invalidity and undying desire to obtain his own kingdom compel him to sacrifice his comrades during the fifth Eclipse, for kinsmanship with the God Hand as their fifth member Femto – a demonic, idealized version of himself stripped of his human inhibitions. In time, he is incarnated into the Physical World, concerned solely with the realization of his dream, which comes to pass with his thwarting of the Kushan invasion of Midland, the Great Roar of the Astral World he prompts, and the rise of his utopian capital city, Falconia. Griffith has always carried himself in a well-mannered, exemplary fashion almost indistinguishable from that of nobility; his mannerisms, coupled with his keen intellect, often leave people astounded at his humble origins. Self-assuredly unique from others, Griffith's presence has always been undeniable; those who meet him end up viewing him with either good will or animosity, with the former growing into trust or fellowship, and the latter into awe or even dread. Those who choose to follow Griffith typically are overcome with emotions upon their first encounter with him, either entranced by the thought of splendor and grandeur at his side, or reeled in by his strong sense of ambition and conviction. Conversely, he is capable of perceiving even the most subtle ill will a person harbors toward him, even upon first meeting them, and acts accordingly from that point on. An understanding of such human emotions and motivations, and an unbridled ambition paying heed to nothing but ascension, have enabled Griffith to ascend alone above all. Even as a child, Griffith's strong sense of self and ambition were apparent. It is in the back alleys of his childhood city where he first sets his sights on acquiring his own kingdom. He has a multi-faceted demeanor during the earlier years of the band, at times appearing carefree, and almost child-like, while other times demonstrating ferocious killing intent and deadliness. This juxtaposition of undeniable distinction and common-born idiosyncrasies is what attracts people of varying walks of life to his mercenary band. In spite of his large following, in his earlier years, Griffith's ego is never noticeably inflated; after one of the Band of the Falcon's earlier skirmishes, he even takes the time to lament the death of a ten-year-old Falcon-in-training, remembering the boy's name and expressing regret over compelling the young soldier to join his cause. The deaths of those fighting for his dream take a toll on him. In order to cope with the loss of them and ensure that their deaths are not in vain, Griffith employs callous logic and reasoning, placing higher precedence on success than compassion – paradoxically expressing compassion for his comrades by suppressing it. It is not long before he is completely apathetic to his comrades' deaths. Even then, he still possesses his humanity, and questions his immoral schemes, at one point inquiring of Guts if he is a cruel person. The high esteem to which he is held does eventually have an effect on his ego. Despite the affection he displays toward his comrades, Griffith comes to believe they are beneath him nonetheless, considering them nothing more than tools for achieving his dream, with none of them fitting his criteria of a true friend. Among the tens of thousands of allies and enemies Griffith encounters, Guts is the only one who manages to stifle his ambition and make him forget about his dream. He explicitly displays care for Guts, on several occasions risking his life to save the swordsman, and even losing his composure upon Guts' endangerment. It is because of this that his ego crumbles after Guts' departure; so accustomed to seizing all of his desires, Griffith forgoes all logical reasoning upon losing his most treasured soldier, throwing away all he has achieved, and endangering the Band of the Falcon after suffering merely one loss. When he invokes the Eclipse and is presented with a reflection of his true self, he comes to terms with who he sees – a martyr to the god named "dream", first and foremost – and accepts the consequences of his ambition. Griffith's rebirth as Femto brings about the crystallization of his ambition, rendering him undeterred by moral inhibitions and concerned solely with the realization of his dream. However, Femto is essentially the same as Griffith was before his rebirth, devoid particularly of his humanity and fundamental human emotions while still possessing his memories, ambition, and ego. He has proclaimed to be "free" – his heart frozen as a member of the God Hand. Though extrinsic to Griffith himself, the residual feelings of the child fused into his vessel are enough to compel him to act outside of his immediate interests and to even shed a tear upon experiencing the child's lingering sense of longing. Such sensations are ephemeral for Griffith, however, and he has asserted that what emotions of the child he experiences after the child's occasional full appropriation of his vessel vanish immediately following his return to form.