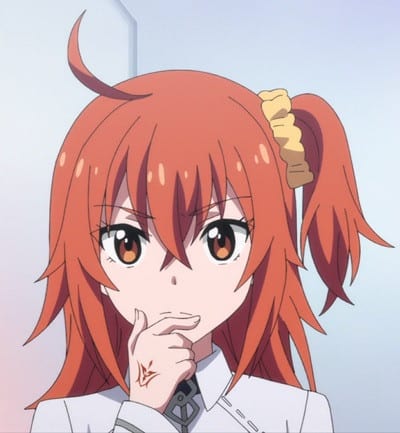 Gudako, also called the Nameless Master or Master without a Name and Ritsuka Fujimaru, is one of the main characters of the Learn with Manga! FGO series. She is the Master of Berserker. Gudako is, for all intents and purposes, a "chibi" version of the female design for Fate/Grand Order's protagonist. She wears the female version of the Mystic Code Chaldea uniform or its Arctic version, has orange eyes that don't seem to reflect light, and has short red hair with a side ponytail and an ahoge. Occasionally, she wears only underwear or nothing at all. Her facial expression is usually a blank, open-mouthed smile. Gudako exhibits a noticeably erratic and eccentric (if not outright insane) personality characterized by an all-consuming addiction to gambling on gacha. Belligerent, impulsive, and volatile, she often berates, harasses, and abuses the people around her in various ways, particularly her Servants. Gudako seemingly has a love/hate relationship with rolling gacha: while she often demands Saint Quartz in order to facilitate rolls and goes into manic fits of excitement upon learning that she can play the gacha, she also warns other people to stay away from gambling on gacha and cites it as being a hell she can't escape from. Even so, her attitude towards her Servants is incredibly poor. She discards low-rarity Servants as worthless, and treats her high-rarity ones little better, frequently neglecting or assaulting them. Gudako's motivation for gathering Servants seems to be largely credited to lust. She is seemingly exclusively interested in women, with a particular fondness for Mash Kyrielight and Olga Marie Animusphere. With other people, she tends to alternate between an utterly uncaring, sadistic, and abusive attitude, and an extreme protectiveness and genuine fondness- often doing so for no logical reason. When Mash is absent her already unstable temperament becomes even more psychotic, squandering Command Spells to force her Servants to dress up in ridiculous costumes and add "cute" suffixes to the end of their sentences. Gudako is extremely lazy, and has absolutely no regard for her position as a defender of humanity; indeed, she may not even be entirely aware that she's supposed to be defending it at all. It is often noted that, despite her having been active since launch, she makes very little progress in the game's story mode, preferring to focus on farming and events or accumulating quartz and only beginning Part 2 after it seemed Mash would leave her otherwise. For this reason, Chaldea has made active efforts to remove her from power, which almost always fail. She also complains incessantly about the game itself, and is especially vocal when complaining about the inability to skip Noble Phantasm animations.