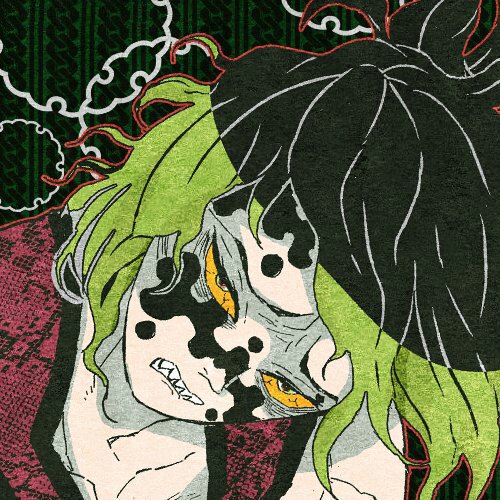 Gyutaro is one of the primary antagonists in the Entertainment District Arc of Demon Slayer: Kimetsu no Yaiba. He is a Demon affiliated with the Twelve Kizuki's Upper Ranks, being true holder of the position of Upper Rank Six, which he shares with his younger sister, Daki. Gyutaro was a tall man with a black-dotted, pale grayish complexion whose anatomy was somewhat strange in that his upper torso, arms and legs were all extremely muscular where his waist was incredibly skinny, his pelvis jutting out at an unnatural angle. He possessed thin, green and red eyes, their sclera bright orange, that were slanted drastically downwards at the sides, the kanji for "Upper" and "Six" carved across them. He had unruly black hair that cut sharply off to a brighter green around the crown of his head, worn messily styled with uneven bangs and several ahoges. Gyutaro has been noted several times to have looked very ugly. Gyutaro wore no shirt, only sporting a pair of baggy blue pants and seven pieces of pattern red cloth to decorate his body, one large one around his neck and three smaller ones around each arm. Due to the hard life he lived in near-constant poverty and the harsh tragedies he experienced as a human, Gyutaro portrayed himself to be cruel, petty and envious of anyone blessed with a better life than him, leading to him developing a habit of sarcastically complimenting a person's best traits and then trying to vindictively kill them afterwards, as he did to Tengen Uzui. Because of these hardships he faced as a human, Gyutaro eventually developed a personal belief that to take from those who have a better life than he had as a human is justified. A habit he seems to have is the penchant to inflict harm to himself when he is angry, frustrated or jealous as seen when he scratched himself hard enough to tear deep wounds into his own flesh when he grew jealous of Tengen. Having lived over a hundred years and battled many Demon Slayers and Hashiras, Gyutaro has become somewhat arrogant and prideful in combat, developing the habit of underestimating his opponents and looking down on them as beneath him, as he did with the team of Demon Slayers dispatched to kill him by having his sister fight and deal with them first rather than himself. Despite his negative traits, Gyutaro does possess a genuine, strong love for his younger sister, Daki. Having raised her himself due to his mother's mental instability, this familial love was so strong that, despite becoming a Demon and nearly forgetting his life as a human, he still retains a considerable attachment to her. Due to this, he has developed a tendency to occasionally spoil and allow her to do whatever she pleases, even if her actions go against his best interests. However, his love for her does not stop him from screaming and insulting her out of frustration. Upon his death and his final thoughts, Gyutaro is shown to possess no regrets on the choices he made throughout his life—especially his choice of willingly becoming a Demon and his subsequent actions of killing and eating hundreds of people for hundreds of years—showing how misanthropic and bitter he had become due to his terrible and harsh circumstances as a human. However, he later states that his only true regret he holds in his life is his sister, Ume, showing that deep down, Gyutaro regrets that his negative influence through how he raised her was the cause for her growth into a selfish person. During his final moments, Gyutaro wonders if she could have experienced many other wonderful things and lived many different lives without having to walk on the path of becoming a Demon if he wasn't in her life. He genuinely wishes that she was born and raised by someone other than himself, completely shouldering the blame for all of her deplorable actions and showing just how much he loves her. Later, even in death, Gyutaro is shown to have Daki's best interests at heart by telling her to go to the opposite direction where the light was better, showing that he wished Daki would have a fresh start to a new life without him being a bad influence on her.