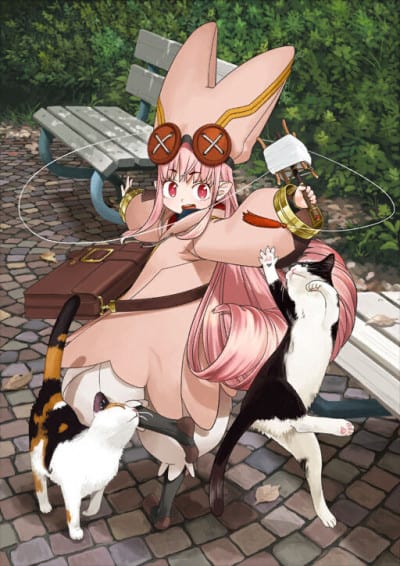 Habetrot, Class Name Rider, is a Rider-class Servant summoned by Ritsuka Fujimaru in the Grand Orders of Fate/Grand Order. She isn't simply short by human standards, but actually as small as a fairy, about the size of a just-born baby. She rides on top of a makeshift airship to give her sprite some kind of bulk. Introverted and active. Despite not being prone of self-assertion, she performs what she must do/what she wants to do in a powerful manner. She likes good people and hates bad people. Be that as it may, since the person herself is neutral, despite making a distinction between good and evil, she is not the type to arbitrarily decide which is better and which is worse. Fundamentally, Habetrot does not hold a grudge over others. She views peace as "comfortable". Conflict is "unpleasant due being tiresome". That is her sense of values. Basically, she is a fairy that is happy so long she can enjoy herself with some sewing work. The Habetrot from the Lostbelt suffered with issues on her memory capacity due to the culture of "seeing off brides" not being developed, but the original Habetrot is very clever despite being a small fairy. Also, regardless of being from the Lostbelt or from Pan-Human History, both shared the common trait of being very considerate to others. In most cases, humans who get involved with fairies go through a bitter experience, but Habetrot is viewed as a fairy that consistently "protects brides". Even if said bride has a past she feels guilty about, or committed some sort of sin. Habetrot will sacrifice herself for the sake of that bride's happy future, guiding her to a joyful conclusion. Whether it is the Habetrot from Pan-Human History or the one from the Lostbelt, her true nature remains the same. That is: to find a young girl she likes (those Habetrot feel that have the right to become happy brides) and utterly support and look after her. Habetrot call such a young girl "my bride". After sending out a bride, she will soon look for another one. She ends up becoming engrossed upon finding a good girl, even when she already has a bride, so people say she has a personality that is prone to fall in love. Although this is not often spoken, but she is the embodiment of devotion. A fairy of self-sacrifice that priorities the happiness of the bride over her own. The reason why Habetrot perceives brides as "treasures" is because she is a fairy that can never become an "adult". The truth is that she wants to become a bride herself, but since that can't come true, she at least tries to protect the future of the lovely girls that made her fall in love at first sight. Substitute behavior. Or maybe, a brilliant dream such as "it would be wonderful if one day I could... no, I would become like that".