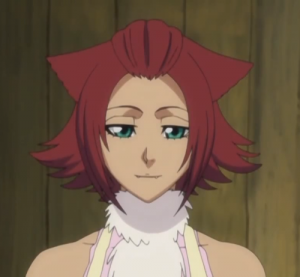 Haineko is the manifested spirit of Rangiku Matsumoto's Zanpakutō. Haineko's physical manifestation takes the form of a curvaceous woman with turquoise eyes, olive-colored skin, a large posterior, and chin-length maroon hair, which is styled into two cat-like ears at the top and frames Haineko's face with several long bangs. She has pink fur covering her forearms, her pelvis, her feet, her left leg, and most of her upper torso. She has a tuft of white fur covering her neck and extending down to the middle of her chest, and there is a ring of white fur around her right thigh. She has a long, pink tail and claw-like nails. While under the influence of Muramasa's brainwashing, Haineko is somewhat impatient and impetuous, attempting to leave the cave of the Zanpakutō spirits because she feels bored waiting for Muramasa to return and later demanding to know how long they will have to stay there. She is somewhat fond of perfume, and frequently sprays it on herself. She is also quite confident in her own beauty, believing her charms would make it easy to defeat Ichigo Kurosaki. She is somewhat perverse, grabbing Tobiume's breast in order to prove a point and referring to Ichigo's Getsuga Tenshō as his "little thingy"; Tobiume states she is very indecent and vulgar. Haineko often compares her own body to Tobiume's, and believes Tobiume's attitude toward her stems from jealousy. At one point, Tobiume notes Haineko's idea of fun and excitement is enough to give any normal person a heart attack. Haineko is loyal to Muramasa, and is willing to hold off Yoruichi Shihōin, whom Haineko knows is much more powerful than her, in order to further Muramasa's plans. Haineko has a somewhat tumultuous relationship with Tobiume. They often argue with each other over their individual definitions of beauty and their attractiveness to men, and often resort to physical violence. Additionally, they both vie for Hyōrinmaru's attention on a regular basis. However, Haineko and Tobiume frequently fight as a pair against their enemy, though they continue to banter and trade insults with each other. Additionally, they often blame each other when something goes wrong during a battle. Haineko acts very rudely toward Rangiku Matsumoto; upon materializing before her, Haineko shoved Rangiku aside and told her to move out of the way. Haineko frequently calls Rangiku an "old lady", and claims to have left her because she felt old simply by being around Rangiku, whom she states is "lame". Additionally, Haineko claims she is "young and beautiful" in comparison to Rangiku, who is "old and washed-up", and wishes Rangiku was an attractive man instead of a "crabby old hag". In spite of her attitude toward Rangiku, Haineko shares a similar taste in clothing with her. Haineko later admits she left Rangiku because she wished to lead a new and exciting life without her. Haineko has a somewhat rigid definition of beauty, believing women with noticeable breasts and curvaceous bodies are beautiful and irresistible to men, which is why she is shocked when Ichigo runs away from a "beautiful lady" like herself. She believes all women reach a certain age at which they are no longer beautiful, and claims intelligence is not "cute". In battle, Haineko frequently teases and insults her opponent. During her battle with Rangiku, Haineko sarcastically claims to be impressed by an "old lady" like Rangiku being able to keep up with her attacks. After seemingly impaling Yoruichi, Haineko derided her former position as the commander of the Onmitsukidō. However, Haineko will lash out violently upon receiving any physical injury. Haineko objectifies the men around her to a certain extent. She takes a special interest in Hyōrinmaru because of his physical features and stoic personality; during one of her scuffles with Tobiume, Haineko called Hyōrinmaru "darling" and pretended she was the victim of Tobiume's jealousy before asking Hyōrinmaru to protect her. Though only having recently met Ichigo, Haineko referred to him as her "boy toy". After being freed from Muramasa's brainwashing, Haineko is much more friendly toward Rangiku and those around her, drinking sake alongside Rangiku at a party. Additionally, she is more lenient toward her opponents, and refuses to kill those who are too wounded to fight back, such as Narunosuke. She ends up falling in love with Narunosuke despite being under orders to kill him, and becomes willing to lie to Rangiku and steal from the 10th Division in order to help and protect him. She eventually becomes so attached to Narunosuke that she fights Rangiku to protect him, but later kills him herself in an act of mercy, though she is visibly distraught by having to do so. Rangiku herself notes Haineko acts much more level-headed even after consuming a considerable amount of sake, and Haineko calls herself a mature woman because of it. Haineko frequently mentions her preference in men in regards to the current situation. When Kazeshini and Gegetsuburi argue over how strong their masters are, Haineko comments that she does not like men who only live to fight like them. Despite this, Haineko admits to going after every man she sees, but does not care about how this affects others' perception of her. Upon encountering Narunosuke and experiencing feelings for him, Haineko tells herself she likes older, more muscular men who are filled with testosterone.