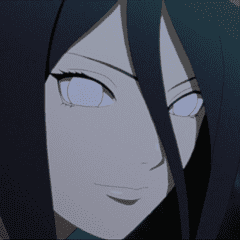 Hanabi Hyūga is a kunoichi from Konohagakure and the heiress of the Hyūga clan. Hanabi is a young woman with long, black hair (depicted as dark-brown in the anime), that reaches down to the middle of her back, with long parted bangs with a single lock of hair falling into her face. She also has large, white eyes — a trait shared by all members of her clan. In the anime, her eyes have a hint of lilac in them. Overall, she resembles her father. In Part I, she was seen wearing a sleeveless, blue v-neck shirt with mesh armour underneath; blue shorts and sandals. Her hair reached the middle of her back. During Part II, Hanabi had cut her hair short, framing her face in an asymmetrical bob style with the front bangs reaching below her chin. She wore a modified version of her original outfit and had a tan vest jacket with white wristbands on both hands. She wore shinobi sandals with white bands underneath around her ankles. At the time of Pain's Assault, she wore a light yellow kimono with light violet painted textures, a red-orange obi with a green cord around, and white tabi with sandals. Hanabi also had a pink flower hair clip attached to her hair on the left side. Two years after the Fourth Shinobi World War, her hair has grown significantly longer and is tied into a lower ponytail, with a white ribbon. Her hair now reaches well past her hips, and she has two shorter strands of hair in the front with pink ribbons at the ends. She wears a tan-coloured and long-sleeved kimono shirt with red-orange flames designed on it with a matching knee-length skirt, along with a white obi around her waist. Years later, Hanabi has grown noticeably taller and slender. She now wears her hair with shorter bangs in the front reaching her chin to frame her face while the rest of her hair which she keeps in a ponytail and reaches her shins. She wears a yellow kimono blouse, a traditional long red skirt held closed by a simple white obi. Hanabi's character was not expanded on in the manga very much. In the anime, Hanabi seems to be a quiet, polite and respectful girl, although she seems to open up to people a bit easier than her sister. Unlike how Hinata once was, Hanabi is more confident. In the anime, since a young age, Hanabi adored her elder sister, always wanting to spend time with Hinata and just being close to her. She was also sad when she learned the harsh conditions Hinata had to endure. When Hanabi learned of the harsh nature the Hyūga lived by and that she would be expected to lead her clan, Hanabi gradually became more hardened, similar to Neji's original views in pre-destined fate and its inescapable nature, determined to not let her clan down as the future leader. After seeing her sister rise beyond everyone's expectations and grow so strong, Hanabi regained much of her previous joyful demeanour. Also in the anime, she gained great respect for the social outcast, Naruto. This came not only from changing the views of both Neji and Hinata for the better by inspiring them, but also convincing herself of being able to shape her own fate. She is also supportive of Hinata's feelings for Naruto, as shown two years after the war. Hanabi is also described as a "fashionable young woman and extravagant in her tastes". By adulthood, Hanabi matured considerably, taking her duties as a jōnin sensei and future clan head very seriously. She is noted to be a very strict teacher in the former. She is shown to dote on her niece and nephew Himawari and Boruto, gushing over them when they came to visit the Hyūga estate. At the same time, she encourages them to be independent and only ask for help with their problems only after they tried everything else. Hanabi also takes great pride in her cooking, comically showing annoyance when Boruto stated that her sister was better. Overall, Hanabi still has a strong compassion for Boruto, strongly wanting to see him succeed. To which, she has developed a strong bond with Konohamaru Sarutobi, who also sees Boruto as a younger brother. As the leader of Team 15, Hanabi proves herself being extremely strict and tough on her students, seen when she urged Namida to hone her skills in Water Release, and refused to take easy on the young kunoichi despite Namida's cries for help. Whenever her students disobey her or put themselves in unnecessary risk, Hanabi can become incredibly ruthless and hostile, seen as when she angrily scolded and reprimanded Wasabi and Namida for taking action against a group of missing-nin who were in the Bingo Book. Nevertheless, Hanabi strives to help her students achieve their full potential, and enjoys spending time with them, even when off-duty.