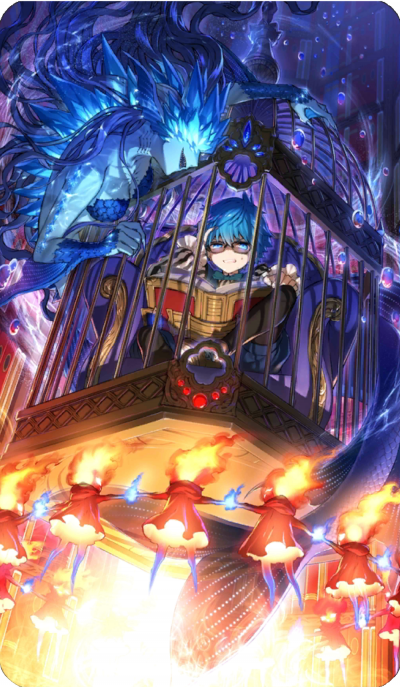 Hans Christian Andersen, Class Name Caster, is the Caster-class Servant of Kiara Sessyoin in the Moon Cell Holy Grail War of Fate/EXTRA CCC. He is one of the Servants of Ritsuka Fujimaru of the Grand Order conflicts of Fate/Grand Order. Andersen appears to be a young boy around the age of 10 in formal clothing. Despite this, he has the voice of a man much older and his body is covered in scales, burns, frostbite and a myriad of other traits taken from his stories. Though Heroic Spirits should be at the "golden age" depicted in their myths, he interprets it as his childhood being the time when he was most overflowing with sensitivity. He also gains the characteristic of sudden understanding, such as looking over materials of his former self and finding them so rambling to the point of embarrassment. Even a prodigy becomes a normal person once they're out of their twenties. He also theorizes the possibility that he was summoned at that age due to that evil woman's interests. Andersen is incredibly blunt, often pointing out people's flaws. Because of his high rank in observation, he understands their failings quite easily and points them out, but it is not because of malicious intent, merely understanding. He is not so much a bad person, as simply following his Master's directions. Although he hates his Master to the point to call her the crystallization of the ugliness that is women, he believes that a Servant is their Master's ally, even to the depths of hell. He is not only blunt with everyone, but also with himself. He calls himself a man you could find anywhere, he says that he has no fighting ability and that basically he's useless, a third-rank Servant well-suited to his disgusting Master. When he sees Hakuno Kishinami for the first time, he points what an amazingly ordinary face he/she has, pointing that's how a buffoon should be. He thinks that stupidity is called a sin, but as a member of the masses, to be tossed about by the world is good fortune. At any rate, one gets to enjoy both good and evil. That is called living a full life. To Andersen, we are all born from our mother's wombs simply to laugh at the ugliness of the world. One can't trust other people, and more specifically one can't trust women. Andersen says that to say the truth is his job. Human lives have worth, every person is a leading actor, but those who produce a fine performance, who have the curtain fall on a masterpiece, are the small handful of victors. He has a introverted, self-assured, and passive personality. As a dour, pessimistic poet, he has no intention of being liked by others, and as it no longer has any worth for him to discover, he lacks any intention of enjoying life. Andersen does not desire anything from the Holy Grail. The cause is probably that he didn't attain even one of the things he desired when he was alive. "Let’s assume that life has value. That is probably something even lower than what people have delusions of." And so he conducts himself as one who hates everything in the world. "But, well, even if I hate the world, it’s not as if I detest it. If there is something worth loving, it would be fine to once again light the firewood in the fireplace of frozen affection." He is truly a bothersome man. Though Andersen always criticizes Kiara, he is not Hakuno's ally either. That is just the manifestation of the impartiality that distinctive to him. As Andersen is methodical like an author, being helpful is his true nature. First of all, if one does not think to entertain the readers, to serve the readers, then one is not fit to be a writer. He has a dark nature and is a pessimistic poet who has no desire to be liked by others. Furthermore he is no longer able to see any remaining value in himself, and completely lacks the notion that he should enjoy, or is able to enjoy his life. But he will not laugh at the efforts of people who decide "let's live correctly" and "let's achieve this all our power." Because that is what he once dreamed of, the form of a society that wished to be like that. Although he was summoned as a Servant, he has no wish or desire. This is probably because while he was alive he was unable to obtain anything he wanted. The reason Andersen advises Hakuno who was trying to resolve the incident, even while telling them, "Your actions are futile. Just leave those girls alone," in a flabbergasted manner, and never delivered definite repudiation against Kiara who was causing the situation to deteriorate, even while cursing her by saying, "Greedy, impudent, and on top of that, a liar! Only the demon in a fairy tale could be as unsightly as you!", is because both Hakuno and Kiara were earnestly "living their lives with everything they had." In the end. "A final light (sentence) for that unrewarded life."That is this Servant's foundation. Andersen who, though he was a world-famous author, did not attain even one of the things he desired. The writer of fairy tales who, while speaking of love, never once attained it. To him, a story about "a life where one struggles then disappears without being compensated" is what should be told. Humans who become happy easily are the same as scenery to him. They can just be happy of their own accord. "I want to give a final light to the lives of people who were abandoned by even God," is the nucleus of Andersen's soul. If someone come to a stop on the final path and then turns around, he should be able to see a fragment of this Servant's truth.