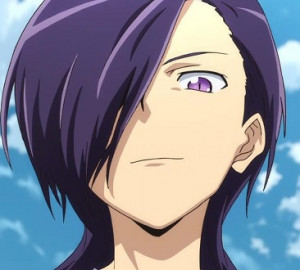 Hanzō Urushihara/ Lucifer is a fallen angel and one of the Demon King's generals. After his defeat at the hands of Hero Emilia, he was secretly rescued by Olba Meyer, who promised to return Lucifer to heaven if they became allies in defeating the Demon Lord. After being defeated by the Demon Lord, he moved in with Sadao Maou and Ashiya. In human form, Urushihara appears as a short, skinny boy in his late teens. He has fair skin and floppy, dark purple hair that is longer than average, with a long fringe and several strands that reach just past his shoulders. His eyes are violet. He is usually seen wearing a casual, white, short sleeved top with light purple sleeves along with black trousers that are rolled up at the bottom, along with a pair of blue and white converses. He also wears two purple piercings on each ear. When he regains his powers, Urushihara gains a pair of black, feathery wings. After repeated consumption of Suzuno's Celestial Force imbued cooking, Lucifer's wings momentarily regain their white color. Lucifer is shown to have a cunning, sneaky personality, like in the anime-exclusive episode 6, where he uses Maou, Ashiya, Chiho and Emi to fetch his forgotten game console from an abandoned classroom under the pretext of finding a way to regain their powers. This also hints at his childishness, preferring to surf the internet and play games rather than help Ashiya with the housework. Due to his attitude, everyone tends to treat him lightly and pay no mind to many of his protests at being excluded from things, such as not having a seat at the table when there are many guests over. He has also self-proclaimed himself as socially awkward when he fell victim of a scam, and has a short temper causing him to yell at others. He is, to an extent, lazy, not even looking away from his computer to eat and yet expecting good meals from Ashiya and Sadao at the same time. However, it seems he has hidden feelings beneath his seemingly irresponsible and carefree attitude. He shows his serious side from time to time, as seen when he sells his hard drive in order to help pay the debt (which inadvertently results in a greater debt), or when he helps Maou and the gang in multiple occasions. Also, he's good with technology and loves playing video games. To his irritation, Lucifer is usually referred to as a hikikomori even when among company.