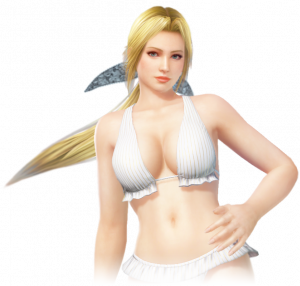 Helena Douglas is an opera singer and pigua quan martial artist from the Dead or Alive series, making her first debut in Dead or Alive 2. She is the current leader of DOATEC, and the illegitimate daughter of the late Fame Douglas, the former head of the DOATEC, and Maria. She is also the half-sister of Kokoro. Helena enters the Dead or Alive Tournament to find the assassin who killed her mother. Although she was being manipulated by Victor Donovan, she ends up inheriting control of DOATEC after her father’s death. Helena is the main protagonist of Dead or Alive 4. She was the winner of the fourth Dead or Alive Tournament, but gave the title to Zack. Helena has an upper-class appearance. She is of average height, with fair skin, a heart-shaped face, sharp facial features, and blue-green eyes. Her hair is blonde, and reaches down past her waist, styled with segmented center part bangs, and is tied into a low ponytail with a decorative bow; the bow changes color to match her outfits in earlier games. Her outfits normally consist of dresses and suits, thigh-high boots, ruffles, bows, and cord ties. Her primary outfit is a black, blue and white sleeveless catsuit with long leather thigh semi heel boots. She also wears long gloves, and a brown, silver, and blue vest with yellow tied lace to hold it up. Her outfits are usually opera and French themed, like dresses, suits, trousers, and royal jackets. In Dead or Alive 5, her appearance has been altered to give her less of an anime appearance, with smaller eyes and more realistic features. Her hair is also noticeably shorter, no longer past the waist as before, only coming to exactly the waist and stopping near her bottom. Her bow no longer changes color to match her outfits, with it instead being a black lacy bow in all her attires. Her hair can also be worn loose for the first time in the series. In Last Round, she is given a new hairstyle: A side braid that sits on her right shoulder with braided sides. This was called a Royal Braid according to Xtreme Venus Vacation. She also has a half-up ponytail. In Dead or Alive 6 Helena remains the same but is further detailed, wearing a more modest black Chinese cheongsam dress with a short sleeved embroided vest to go with it. The dress features a simple cleavage opening and is slitted at the sides, and she wears sheer stockings with elegant flat black shoes to complete the look. Her attire is mostly older costumes from Dead or Alive 5 including recolors, and she also receives a new elegant Victorian dress with a jeweled neck accessory, a matching hair ribbon tied on her side braid, and she wears matching boots that complement the dress's frilled sleeves and skirt hem, and it's colored either black, red, or light blue depending on the recolor. Initially, Helena was outwardly haughty and unconcerned with other people. Above all else, she was obsessed with seeking revenge on her mother's killer. She appears to be willing to go through any means to achieve this end; however, this quest seems to drive her to an emotional brink. However, Helena is not intentionally cruel and has the ability to be kind and warm. This is shown by her friendships with Kasumi, Leifang and Gen Fu. It's also hinted in her fighter quotes as well as her volleyball quotes that Helena is religious, or at least believes in a god, a heaven, and a hell. When Helena returns during the events of the fifth tournament, she has gone through a few changes. No longer driven by revenge, she now seeks to reshape her father's company into something that could better benefit the world. On the side, however, she is focused on finding the whereabouts of the missing Donovan as well as Alpha-152. Helena now shows more of her caring side by seeking to ally herself with Kasumi and Hayate. She is also seems to be much friendlier to others, such as Bass Armstrong. However, she shows much more of her kindness when she once again meets with her half-sister, Kokoro. Due to how Kokoro is the only family she has left, Helena is determined to protect her, keeping their connections a secret before reluctantly revealing it when confronted with a picture of their childhood. She even went as far as begging Kokoro to stay. She is also shown to be modest regarding her attempts at running DOATEC, as when Misaki asks if she was a great CEO, she makes clear that, while she does try to be a responsible CEO, she cannot say that she is a particularly great CEO. She isn't above bragging, however, which she admits when receiving a birthday swimwear from the Owner. She may have had a mischevious side as well, as Tamaki claimed that Helena also loved to "prank" girls while smashing watermelons (referring to groping them while they were blind). Despite all the loss she has endured, Helena is able to accept death and move on from it, something she lectures NiCO about whilst rejecting her plans about resurrecting people. She also is able to move on from those who wronged her, as she doesn't appear to have any true malice towards Christie for example who was responsible for the loss of her mother.