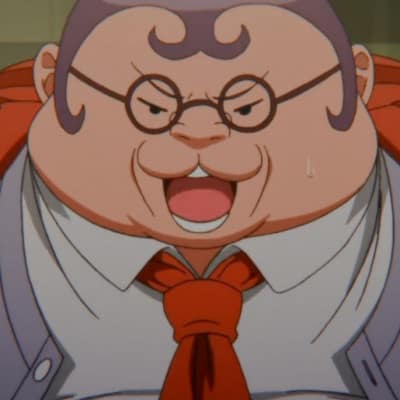 Hifumi Yamada, is a student in Hope's Peak Academy's Class 78th, and a participant of the Killing School Life featured in Danganronpa: Trigger Happy Havoc. His title is the Ultimate Fanfic Creator. At the beginning of the Killing School Life in Danganronpa: Trigger Happy Havoc, Hifumi appears to be a young high school-aged teenager, but due to the memory loss, he is two years older than he believed. He has an overweight figure, with large hands, thin legs, and a face that comically resembles a hamster. He has short black hair that ends with curled points against his cheeks and forehead and a small pointed ahoge. Hifumi wears a pair of black, thick-rimmed glasses. He is dressed in a white button-down shirt, an orange tie which has a patterned vertical double-headed blue arrow design, a pair of dark gray trousers, and grey trainers. Over his shirt is a light grey, unbuttoned cardigan and on his back is an orange backpack. On the sleeve is a white mountain symbol from his Former High School. During his school years, he wore one-of-a-kind briefs based on Robo Justice. Due to Hifumi's weight, the underwear has been stretched into a rather form-fitting thong. Hifumi has a verbose manner of speaking, often going on long-winded tangents about his interests such as anime or fanfiction. He also has a tendency to casually make creepy or perverted comments in the middle of conversations, especially about or to women. He can also be oblivious to how others perceive him, as shown when Toko says he smells like a "big fat ugly donkey" — he couldn't tell if that was an insult or a compliment. However, he also displays some intelligence, such as when he figures out one piece of Sayaka's dying message in the first trial. He also has late reactions to shocking events, as shown when Leon tries to pin the murder of Sayaka Maizono on him, and then again when Chihiro Fujisaki's true gender was exposed. He reacted calmly and interested at first, but then freaked out when he fully processed the situation. Hifumi is extremely passionate about anime and fanfiction, and has little tolerance for anyone less dedicated to them than himself, calling them "slackers". His dream is to create a story so powerful it'll inspire others to create their own stories as well. He refers to others in a very formal manner, calling them "Ms." or "Mr." Last Name. For example, he calls Makoto "Mr. Naegi". and Sayaka as "Miss Maizono". In the original Japanese game, he uses the honorific suffix -dono as well as their full name, for example, "Naegi Makoto-dono". This proves to be a key piece of evidence later during the trial for his murder as he mutters "Yasuhiro", Celestia's real last name as opposed to it being Yasuhiro Hagakure's first name. Although having a somewhat misanthropic look on society, Hifumi will not stand for indecent crimes against those he holds in deep regard. He even went so far as to kill Kiyotaka to avenge the harm he falsely believed he had done to Celestia, showing that while he has good intentions, he is somewhat gullible. Hifumi seems to have an addiction to Diet Coke, and can get to the point of hallucinations if he goes too long without having it, sometimes becoming violent.