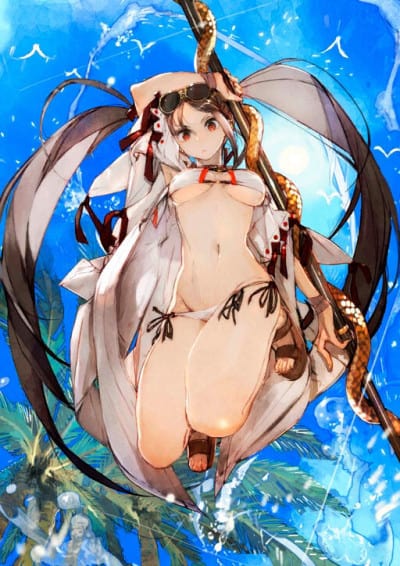 Hinako Akuta is one of the seven Crypters, Masters attempting to supplant the Greater History of Man with that of the Lostbelt in Fate/Grand Order: Cosmos in the Lostbelt. Despite her desired Servant class being Rider, she is the Master of Saber Prince of Lanling. She was formerly one of forty eight Chaldea Master Candidates and a member of A-Team. She later appears as Assassin, an Assassin-class Servant summoned by Ritsuka Fujimaru. Leonardo da Vinci noticed her having an odd vibe. Hinako seemingly is a young woman with long hair tied in twin tails, she wears white attire and a pair of glasses. Hinako has extremely long brown hair styled into pigtails and white coat that covers her entire body, leaving only a dark turtleneck sweater-dress under and a pair of black boots to be seen. She wears a pair of glasses on her face. Most notably her coat has many buttons and a chaldea logo near her neck serving as an emblem. Her eye color was brown but changed to crimson red upon sucking blood. In her True Ancestor Awakened state, Hinako discards the coat, wearing the same dark sweater-dress and a black dress over it resembling a jacket on the top end. Her hair is still brown but this time styled or let down depending on her Ascension. Most notably, depending on her ascenstion, the dress will have a flame effect on its limb ends and she may be barefoot. She wields chinese swords which may be covered in flames. She is a woman who would be happy just reading books all day long in the shade.[3] Due to the particulars of how she came to be persecuted by humanity for a long time, Yu Mei-ren is a staunch misanthropist. However, she was touched by the fact that Xiang Yu – the only person who understood her – desired for “a repose to the world of humans” until the very end, so she consented to being added to the Throne of Heroes, a place that houses the protectors of the Human Order. In life, Yu had a friendship with Gao Changgong—one so strong that she expressed anger towards his impending death at the hands of the emperor's poison and asked if she should make those involved “sink in a sea of blood.” Upon intercepting Ritsuka's group in China, Da Vinci was shocked by Hinako's behavior and hatred, stating that her current manner was far different from how Chaldea recorded her in the past. She claims to have a strong hate for humans, even calling Ritsuka’s gang insects. Despite that hatred, she found humanity's intelligence impressive after witnessing Da Vinci's new body, but stopped herself before she could completely compliment her. Goldolf compared the hateful look she gave the group to that of someone looking down on cattle. Although she loathes human civilization, Yu Mei-ren does not loathe humans as lifeforms. She possesses a peculiar sense of ethics that should even be said to be a “wild fundamentalism” so to speak, generally affirming in a providence where the strong eats the weak and flourish. However, she exposes her anger towards the use of science and technology to the extent that it overturns the order of the natural world as well as monotheistic values such as “God desired such a thing from humans.” Upon joining Chaldea, Yu greets the Master with a hint of irritation for the previous events in the story. Though currently more in an embarrassed mood, as she more or less put on a disguise prior to manifesting in hopes of not being recognized, which fails. She serves Chaldea wholeheartedly, knowing full well that her power meant she'd be put to work quite often. She is a wrathful woman who holds grudges to those who ruthlessly defeat her, cursing them in the process of disappearing. Her hate for humans is still seemingly strong, and she realizes a mistake in Marisbury's invitation to join Chaldea, but that could just be her keeping up a front, as Yu finds peace in becoming a Heroic Spirit. She feels comfortable among many beings that are human or otherwise, as while it is abnormal, she is not singled out among them and for this, she decides to follow Chaldea and Ritsuka until the end if only out of obligation to them as their senpai. Nonetheless, concerning Yu Mei-ren, the particulars of her appearance into the world where she was a specimen who came from a colony is a trauma to her, albeit an unconscious one, and although the person in question firmly denies it, her true character is that of someone who easily succumbs to loneliness. Towards those with the attitude to be able to become a person of understanding to her, she reaches the point that she can embrace a fairly deep compassion for them (without making a distinction of them as a plant, an animal, an android, etc.).