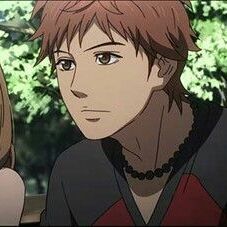 Hiroto Suwa is one of the main characters in the story and classmate of Naho's. He also gets a letter from his future-self to help save Kakeru. With the help of Naho and his friends, they all want to save Kakeru before his fate. He is also the protagonist of Mirai, the story and movie that focus on his feelings towards Naho, as well as his actions that led up to the alternate timeline's future. Suwa is shown to be tall and muscular. His height is 185cm and blood type is O. In the present timeline, he has longer lighter chestnut brown hair and black eyes. He wears his school uniform fairly neatly, donning a dark green blazer, blue sweater, grey slacks, white shirt and brown shoes. Instead of the standard brown school bag, he instead utilizes a red and white Adidas bag, which he also brings to soccer practice. He wears a beaded necklace around his neck in the present timeline, but not in the future timeline. In the future, he wears a black shirt, a blue jacket, green khaki pants, and brown lace boots. Suwa has an extroverted, happy, and easy-going personality. He is the first person to interact with Kakeru after he transfers, which further proves his open and friendly traits. He's occasionally gluttonous, and has a good sense of humor. He is also a kind person who acts selflessly for others, as shown when he's willing to put Naho and Kakeru's feelings over his own so they can be happy. Suwa occasionally acts clueless and unknowing as well. One example of this is with his own letter, in which he tells Naho that he got a letter just like hers, much after its initial arrival (he also never reveals to Naho that they got married in the future). Another example of this is his actions that lead to the alternate timeline's future; he is aware of both Kakeru and Naho's feelings for each other, but stays quiet and never says anything until after Kakeru has passed. Another strange trait of his is his willingness to do embarrassing things; as seen in many examples throughout the story, such as when he gives Kakeru flowers, gets on his hands and knees and begs for Kakeru to join the soccer club, and (in the alternate future) proposes to Naho before they even begin dating.