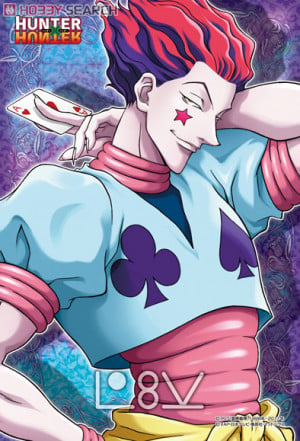 Hisoka Morow is a Hunter and former member #4 of the Phantom Troupe; his physical strength ranked third in the group. He is always in search for strong opponents, and would spare those who have great potential, such as Gon and Killua in order for them to get strong enough to actually challenge him. He originally served as the primary antagonist of the Hunter Exam arc and a secondary one of the Heavens Arena arc, before becoming a supporting character during the Yorknew City arc and Greed Island arc. During the 13th Hunter Chairman Election arc, he briefly reprises his role as a secondary antagonist. Hisoka's appearance is similar to that of a magician or jester. He is tall and has light skin and a very muscular physique. His attire is usually adorned with various suit symbols on the front and back torso, and he changes outfits in each story arc. He wears face paint of a star on his right cheek and a teardrop on his left cheek, and like his attire, in the 2011 anime, his face paint also occasionally changes colors. During the Greed Island arc, Hisoka wears the Greed Island Ring on his left middle finger. And in the 13th Hunter Chairman Election arc, Hisoka wears a pair of earrings with ornamental hearts. For unknown reasons, Hisoka has long, pointed nails, giving his hands a claw-like appearance, hinting at his sinister nature. In his first appearance in the 1999 anime series, Hisoka's hair is blue. After a revamp of the show, it was replaced with a red or almost neon pink color to be in accordance with the manga. In the 2011 anime, Hisoka has red hair and light amber eyes. In the manga, during the Yorknew City arc, Hisoka dyes his hair light green. These dynamic variations in appearance illustrate the complexity of his character. Hisoka is portrayed as entirely self-serving, self-absorbed, and selfish; he does whatever he likes as long as it pleases him in some way. His insatiable love for spilling the blood of powerful fighters in combat and his enjoyment of extreme pain while doing so fuels his seemingly sadomasochistic desires. In order for them to grow to their full potential (so as to improve the pleasure of killing them later), Hisoka allows the main protagonists to live in situations wherein he is easily able to kill them. Likewise, he grows excited to meet new people he deems worthy of fighting or anyone with the potential to be a good fighter and entertain him in the future. The thrill of fighting strong Nen users in tactical battles and near-death experiences is an orgasmic experience for him. It is likely one of the reasons why he goes out of his way to find new toys to play with. If they break, he either loses interest or kills them before going out to find more potential prey. With his manipulative and self-centered nature, Hisoka is essentially a murderous sociopath. While he does like Gon, Killua, and many others, he has stated that for him, what is valuable one day could easily become trash the next, and he will not hesitate to kill anyone should they not meet his standards. He does not care for what has happened in the past, as he is only interested in what could be amusing to him in the future or present. While Hisoka's nature tends to be malevolent, he isn't an indiscriminate killer. He has no problems killing anyone regardless of age or sex; however, he only kills people who are in his way or those he deems "worthy". As such, his character is more simply amoral than flat out evil. He even assists the protagonists if there is "fun" in doing so or if it will make them stronger leading to a more entertaining fight in the future. Above all else, Hisoka cares only about having fun and a good challenge which may or may not involve killing people. He has a nasty habit of skipping out on Spider meetings. He also can be a whimsical liar and has a tendency to freak out or play cruel jokes on his victims. Just witnessing their uncomfortable expressions because of him getting under their skin pleases him. His chaotic nature is inherent in everything he does and makes him dangerously unpredictable. Hisoka has displayed a morbid attraction to fight powerful fighters, or people with Nen who have the potential to become strong, which is expressed through barely repressible murderous tendencies; neither age nor gender do seem to influence his desire to fight them. He has expressed a desire to fight or kill random victims just to satiate his bloodlust. After his defeat at the hands of Chrollo, Hisoka's sociopathic nature has taken itself to worse heights by vowing to kill all the members of the Phantom Troupe even if they were defenseless and claiming he will no longer let his opponents fight in their preferred conditions. However, he did temporarily spare Machi, who has been an implied interest of Hisoka's as a potential opponent he likes to flirt with or as a romantic interest, although he stated it was so she could warn the Troupe of his intentions. Hisoka often exhibits androgynous characteristics throughout the series, manifested in his wearing of "women's" shoes and using an alluring speech style typically reserved for females in Japanese. In the manga, he ends nearly every sentence with a suit symbol. Despite his calm and composed personality, he can express his emotion comically in some situations. An example is when Gon becomes honest and rather innocent about his question of why Hisoka was in Greed Island. Another example is his stunned face when he learns he could not fight Chrollo after Kurapika's Judgment Chain.