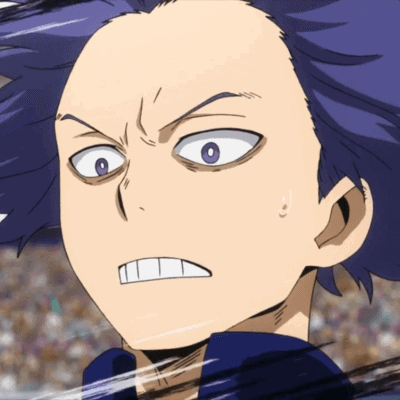 Hitoshi Shinso is a student in U.A. High School's General Department from Class 1-C. Hitoshi is a young man with messy, indigo-colored hair that flares out in large tufts around his head and notably straight teeth. His eyes are purple with white pupils, and are thin and somewhat triangular in shape, pointing downward, with no visible eyelashes. They're usually half-closed, and he has very dark eye bags underneath them. By the time of the Provisional Hero License Exam Arc, Hitoshi was noted by the students of Class 1-A to have bulked up quite a bit since they last saw him at the U.A. Sports Festival. During the Joint Training Arc, Hitoshi wears a prototype hero costume consisting of the long-sleeve winter version of the U.A. PE uniform: a dark blue shirt and pants with thick white lines over his upper body and down his legs which form the letters "U" and "A", and a white marking framed by a red line on each sleeve. In addition to this, he wears a detachable mask-like device over his mouth, known as the Artificial Vocal Cords, which aids him with the activation of his Quirk, a Capturing Weapon, the same as the one worn by Shota Aizawa, around his neck, and a pair of green and white sneakers. Hitoshi is a stoic and straightforward person with an innate ability to spark conversation with anyone, despite holding a reserved and quiet attitude most of the time. He is shown to be rather clever, knowing just the right words to say to manipulate others into replying to his words, allowing him the opportunity to activate his Quirk. He does not seem to mind doing something underhanded if it means he can claim victory in a fight. Due to having his Brainwashing Quirk perceived as evil throughout his whole life, Hitoshi has been somewhat feared by those who are aware of his power and has been discriminated against solely because of the Quirk he was born with. This led him to become resentful of those who had Quirks more associated with hero work, using Izuku Midoriya as an example by stating that someone "as blessed as him" would never understand what it's like to have an ability like his own. Regardless of his drawbacks, however, Hitoshi desires to become a Pro Hero more than anything, with a deep longing to disprove those that doubt his heroic intentions. Not only does he want to refute those who shame his abilities, but he also aspires to usurp students who walk the path towards becoming a Pro Hero, as he always wished to. While he stated he had no interest in making friends, Hitoshi has been surrounded by many students who see him as a friend, including Izuku, Denki Kaminari and Neito Monoma.