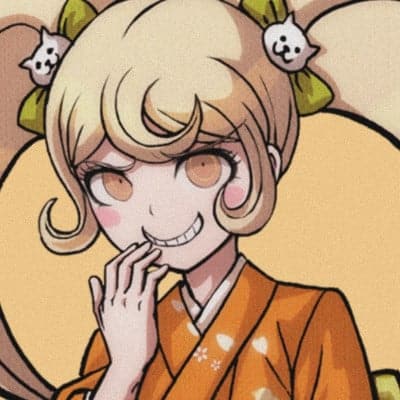 Hiyoko Saionji is a student of Hope's Peak Academy's Class 77-B, and a participant of the Killing School Trip featured in Danganronpa 2: Goodbye Despair. Her title is the Ultimate Traditional Dancer. Hiyoko's cute appearance, voice, and (initially) her way of talking give off the impression she is innocent and childlike. However, in her introduction alone, it is quickly revealed that she is very direct and cruel with a malicious side in how she squishes ants while telling Hajime that they make a satisfying popping noise if done correctly, and even invites him to join her. Later at the beach, she goes around trying to step on and trample the crabs, laughing as if it were just child's play, showing an alarming fascination with it. She is also described to stomp on and tear out flowers for her own amusement, even though she mentions that she likes pretty things like flowers. While not violent towards people, Hiyoko often shows similar mean behavior towards them as well. When Hajime Hinata refuses to squish ants with her, she immediately mocks him by grinning maliciously and calling him a wuss. She constantly judges others and patronizes them with rude insults, and sometimes with swearing, with Mikan Tsumiki and Kazuichi Soda being the most common, as well as the easiest victims. She often takes a jab at Akane Owari as well, though she, unlike Mikan or Kazuichi, doesn't cry or get frustrated but rather actually takes her pranks into consideration due to being very gullible. One time, when Hiyoko was stomping flowers, she was annoyed by Akane's questioning and claimed that "stomping and kicking your food before eating it gives you a lot of more protein". Then, Akane actually started eating the flowers, though she stated they didn't taste that good. Due to Akane's gullibility, Hiyoko notes that she isn't that fun to bully. Out of everyone, she appears to dislike Mikan the most, and she has mentioned that it's because she suspects Mikan is only acting to get attention, which is partially true.