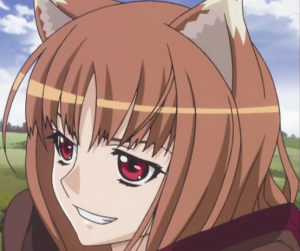 Holo is the deuteragonist of Spice and Wolf. She is a nonhuman, a wolf spirit that lives in the wheat. Originally from Yoitsu, Holo traveled south eventually arriving at Pasloe where she settled down as the village's wheat goddess. After centuries of watching over Pasloe, she escaped from the field she had been living in by inhabiting the wheat on a merchant's cart. She joined the merchant, Kraft Lawrence, on his travels thereafter. When they decided to settle down, they picked Nyohhira where they opened the Spice and Wolf bathhouse before marrying. Holo operates the bathhouse alongside Lawrence. After their daughter, Myuri, sneakily joined Tote Col on his travels, Holo and Lawrence began traveling again. Holo can take on two different bodies: one of a giant wolf- her true form- and the other of a human girl. Her wolf form's body is slightly larger than that of an elephant's. The upper half of her body is covered in wheat brown fur while the rest is off-white. Her eyes are red with yellow scleras. In her human form, Holo appears as a lovely and beautiful 15-year-old girl with red eyes and long flowing light brown hair that reaches her stomach. A pair of wolf ears jut out from the top of her head and a long, thick wolf tail grows out from the lowest part of her spine. The fur on both her ears and tail are the same color as her wolf form. Because her beast-like features could land her in hot water with the Church, she tends to cover up her ears with hoods or hats, her tail with long following skirts, or both with long hooded cloaks. The outfit she initially wore was a purple shirt with a black, fur-lined vest, a black skirt, black and white pants, and a long beige hooded robe. The linings were black bear fur. After these clothes were destroyed, Holo purchased a pink shirt with purple trim, black pants with matching cuff trim, a red silk sash, a light blue anklet on her right ankle, two high quality hooded robes, and cow leather traveling shoes. Later on, she acquired a headscarf made of white rabbit fur trimmed in dark red, and a black collared short cape fastened with a walnut button and matching trim. Soon after meeting Lawrence, she began wearing a red drawstring pouch attached to a brown leather cord around her neck. Holo is smart and confident, though the latter is mostly seen around Lawrence. She is considered to be flirtatious and manipulative towards him, while often mocking his thinking and negotiating skills to the point of making him angered. However, she seems to have a really deep fear of being alone, and having grown fond of Lawrence as her company, she nurtures a strong affection for him, although Lawrence doesn't noticed it until Season 2. She is also seen to feel uneasy about showing him her wolf form, but will do so in order to protect him, even if it means putting her life at risk. She is usually good-humored and talkative. She speaks in a formal manner that might be expected of people during her younger centuries, and rarely, if ever, uses contractions. Holo has a love for alcohol, often drinking when having the chance to do so and usually getting drunk because of it, though is still somewhat able to sustain her wit. She is also somewhat of a glutton. She often convinces Lawrence, usually using her feminine charm, to buy her food, which is usually in large quantities and, at times, expensive. A perfect example of this was when she bought over 80 apples, her favorite food, with Lawrence's money without him knowing about it. She also appreciates how different human food is compared to foraging in the forest, especially how cooking changes it. Holo does experience jealousy toward other girls who talk to Lawrence, as she considers herself his lover during Season 2. One instance of this was shown during her and Lawrence's meeting Nora Arendt. Holo was against hiring Nora as a bodyguard not only because they didn't really need one but also for the fact that Nora and Lawrence became close very quickly, starting seeing Nora as her main rival ,even though Lawrence doesn't consider Nora as love interest. Given that shepherds are enemies of wolves also factored in to Holo's initial dislike of Nora. Holo is a very proud "wolf" but does understand that she does not know everything; an example of this is when Lawrence explains how people get sick via the four humors and that the only way to heal her fever was drinking sydra. In the game, Holo still maintains her mischievous and playful behavior, but now she's more attentive, careful and more strict with Myuri, who always makes messes.