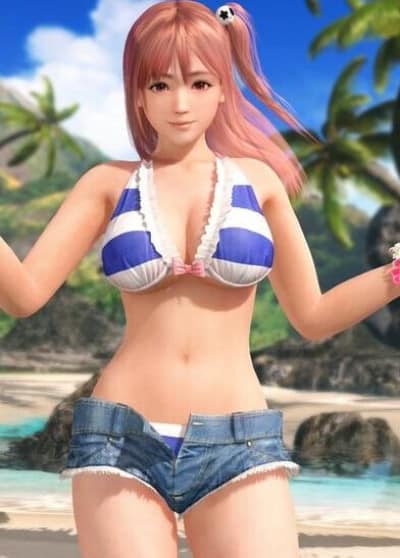 Honoka is a young student, and self-taught martial artist, who made her debut in the 2015 title Dead or Alive 5 Last Round. She later becomes an important character in Dead or Alive 6 due to her connection to Raidou. Honoka is the daughter of Raidou, the biological niece of Shiden and Ayame, the cousin of both Hayate and Kasumi and the cousin and half-sister of Ayane. Owing to her status as a Japanese schoolgirl, her default outfit consists of a school uniform including a blazer, as well as a glove that has a winking skull and crossbones logo on the back of the hand. She has light red eyes, similar to her half-sister, and somewhat tanned skin, along with shoulder length salmon pink hair that is tied into a half ponytail on the left side using a ball with the same winking skull and crossbones motif as her glove, or some variation thereof, save for certain DLC costumes like Last Getaway and New Challengers outfit, which use a flower instead. Honoka currently possesses the largest bust out of all the female characters in the series, a direct contrast to her friend and rival, Marie Rose who possesses the smallest bust, which was even the subject of a pun for their Japanese tag team intro. Her bust size had been hinted at in Famitsu prior to her official announcement, where it mentioned that the new girl had "the biggest." She also has a more curvaceous and voluptuous figure than most of the other younger girls, having very curvy hips, and short but rather shapely legs. She is also one of the shortest characters in the series (with only NiCO, Marie Rose, Kanna and Luna being shorter than her). It is also implied that her massive bust acted as a hindrance towards her wearing swimwear, having them break off multiple times when trying them on (although Honoka herself seems to believe it's due to her eating a lot). Besides her swimwear, she dresses relatively modestly, which could be due to her innocent nature and grandmother's influence. Some of her outfits also contain a cow motif, such as a cow face print on a t-shirt with "milk" written under it, as well as clothes with a cow marking-print and an attached stuffed cow. In Xtreme 3, she is able to wear her hair fully down, and in Last Round, she wears Hitomi's bob cut in pink on certain collaboration DLC such as her Schoolgirl Strikers and Arc Systems DLC with a white hairband in the former. Having been raised all her life by her gentle and loving grandmother, she is, in contrast to her father and half-sister, a sweet, easygoing kind of girl, but when she sees a fight, she cannot contain her excitement or the mysterious power surging within her. Honoka has a strange knack for instantly learning any fighting move she sees. She has kept this power hush-hush, but has been itching to test it out in secret. Her victory quotes indicate she doesn't even know the origin of her powers and seeks to find out about it. She also gets apologetic and offers to help her opponent up after defeating them, implying that while she does want to test her powers out, she cares for others' well-being and doesn't want to injure people. She believes in helping others, and especially in that doing so nets a reward. However, she isn't above lightly teasing her friends, such as Marie Rose. She also loves to eat, especially during festivals, and has a tendency to overeat during those times. Honoka is depicted as having a very child-like demeanor (although not to the same extent as Marie Rose). In the Japanese version of Dead or Alive 6 and Dead or Alive Xtreme Venus Vacation, Honoka, similar to Marie Rose, sometimes refers to herself in the third person, although not nearly to the same extent. She seems to be quite naive and oblivious, irritating other characters at times with her lack of perception. During the sixth tournament, Leifang remarks outright that she thinks Honoka is an airhead. However, she does at least seem to be aware of these shortcomings, as she thanked Misaki for helping her stay on track for the first covergirl event, citing her own airheaded nature as why she couldn't have done it otherwise. She also has a habit of forgetting people she has met before, such as Ayane and Zack. She talks to animals as if they are people, greeting a dolphin on New Zack Island as "Mr. Dolphin" and proceeding to bow to it while asking if they'll hang out for a couple of weeks. She also often talks to her stuffed animal Mister Moo/Momo (Momo-chan in the Japanese version) as if it is alive, and in Xtreme Venus Vacation has referred to the doll as her "best friend", even sleeping with it when she's away from her grandma. In Warriors All-Stars, she is seen to be quite upset that she doesn't have Mister Moo along with her. Lastly, while proficient with learning various fighting styles, she is not quite as good regarding academics by her own admission. Once, she even requested that Marie Rose tutor her in a subject due to failing a test.