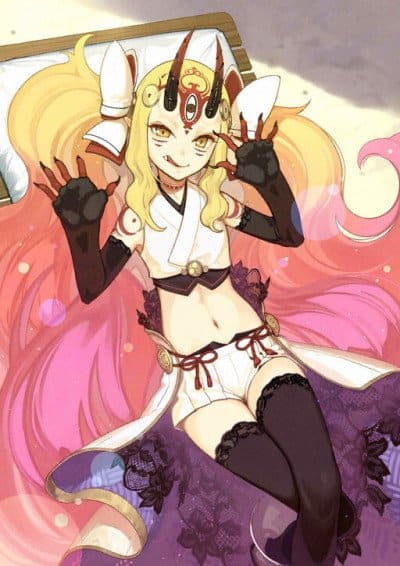 Ibaraki-douji, Class Name Berserker, is a Berserker-class Servant summoned by Ritsuka Fujimaru in the Grand Orders of Fate/Grand Order. A blond haired girl with scarlet blood eyes. In the anecdote of the Rashoumon, Ibaraki-douji appeared in the figure of a "beautiful woman". Ibaraki-douji is a rather short Servant. Her hair is light yellow, with two curled bangs on the sides of her head and cut straight after reaching her thighs. Ibaraki-douji's eyes are of a glimmering gold. The ears are pointed and the earrings she wears resemble black beads. Her horns protrude right out of her forehead, going from black to red. Ibaraki's outfit seems to be a loosely worn, short-skirted yukata with a white, low-cut undershirt. Her yukata, of the same color as her hair, possesses long extensions on her sleeves, decorated with a multi-colored floral pattern. Outside the yukata, she wears a string of large black beads, resembling those of her earrings, while on the inside, she wears a wine-colored sash, tied into a bow on her back, with a yellow hexagonal pattern on each end. With her yukata worn loosely, her shoulders are exposed as a result. Her nails are sharp like the talons of a beast, black by nature. Her hands and feet are of an unnatural blood-red, and slowly transitions into her pale skin in the form of tribal-like tattoos that reach from her hands to her shoulders and from her feet to below the knees. She is barefoot, but black strips are tied around the instep of each foot. Her signature weapon is a great blade of bone that only the demonkin may hold. A mass of curses and grudges incomparable with the likes of swords made by iron. In her second Ascension, Ibaraki-douji's head is decorated by a set of ribbons, and an additional sash is slumped over her left shoulder and covering her torso. Her hair also begins to turn into fire midway through. In her third Ascension, her headwear gets a crown of feathers attached to it, a shimenawa-like rope appears around her waist, tied into a a knot, and the flames of her hair increased in length and took on the appearance of wings. An Oni born in this world with an inhuman appearance. In her childhood, Ibaraki-douji was strictly disclipined by her mother, who descended from a noble bloodline, to learn how to hold pride as an Oni. Then again, when seen from the perspective of a third party, one cannot really see that Oni mother's training as something filled with love. Though it's pretty close to harassment. To summarize it, Ibaraki-douji is self-aware of her responsibility as the child of her noble mother, to have the last of the Onis, a kind being eradicated by humans, act as a group. In order to do that, Ibaraki established a standard rule, and for any of the Onis that break said rules, she would spank them with an iron staff. (Of course, Shuten is the sole exception.) She is a demon, so from the humans' viewpoints, she is unmistakably a wicked beast. But at her root, she is a belle who respects order and ponders over the fate of her brethren. While Ibaraki-douji's appearance exudes innocence, that very state of being is that of an Oni. Hurting humans, devouring humans, loving blood. However, she does not have much of a disposition in the way of selfishly enjoying slaughter and massacre. Her nature is not that of an Oni that brings disorder to the world; in the end, she devours humans as an Oni, as a living being. One can say that she is close to that of a wild animal. For example, even if she appears to be fascinated with sweets, her nature is indeed not that of a young human girl. Depending on the circumstances, she just might devour even the human who enticed her with sweets. Never ever take a lion for a cat. Never. Ever. Yet... If one actually succeeds on feeding her, she just might display a lovely smile. Ibaraki-douji's wish for the Holy Grail is "to see the smiling face of Shuten." The smile of her sworn sibling, one without worry, without sorrow, and without hesitation, is indeed the source of Ibaraki-douji's everything. Be it the famed-in-Kyoto Abe-no-Seimei, or Minamoto-no-Raikou, or her powerful Four Heavenly Kings, Ibaraki is unperturbed in her opposition against all of them, wishing only for that single smile even unto her death.