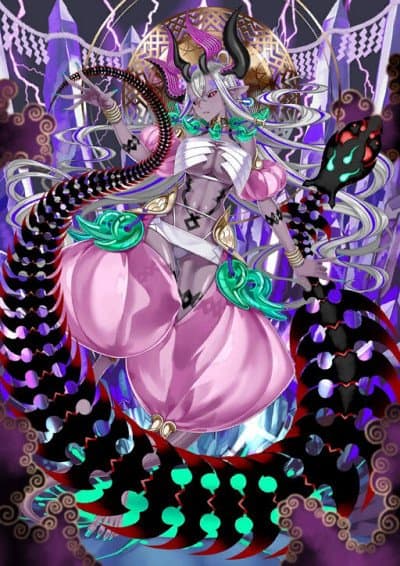 Ibuki-douji, Class Name Saber, is a Saber-class Servant summoned by Ritsuka Fujimaru in the Grand Orders of Fate/Grand Order. Ibuki-Douji is massive in height and has four black-and-purple curled horns coming out of her head, having purple-grey skin and light blue hair with pink streaks, and grows a long snake tail out from her back, yet she's still depicted as a beautiful woman. She also has a large metal halo behind her back, denoting her status as the avatar of the divine eight-headed serpent. Her first Ascension depicts her in her freshly hatched child form. She's a giant by default, but uses her powers to downsize herself when interacting with regular humans. Her nature as a "god/kami" is quite strong and her self-awareness of being a part of nature (the world) is quite intense. She acts according to primitive desires. She doesn't really feel like coming into contact with humans and their culture/civilization. She makes a face as if she is unaware of the depths of alcohol, the delicacy of human lives, and the pleasure of indulging in a moment of insanity, however... Once she immerses herself in desires, she will be completely unforgiving. Without any incentive, she is harmless, but she could be said to be even more dangerous than Shuten-douji in a certain meaning. Once her interest is piqued, she'll be strongly fixated on its object. While the target of her interest exists, her eyes will always be fixed on them. Usually, she'd stretch her long fingers towards them, touch them and destroy them completely───or, she would corrupt them and guide them to their death. The oni species to which her other aspect belongs to can easily pique her interest. Naturally, existences similar to her (children of a dragon god) would also make her eyes sparkle. ...The above is the original Ibuki-douji's nature, but the circumstances of the one that materialized in Chaldea are somewhat different. She's totally Influenced By the modern era. Since her origin is that of a god, she can't look at things from the same standpoint as a human being, her words and conduct is that of "a big sister of a Heroic Spirit/Divine Spirit who's gotten way too used to modern society". Her behavior shows that she's studied up on what human beings are like. She even tries to seduce and arouse others, including the Master. The Heroic Spirit Sherlock Holmes speculates that she either studied about modern society or perhaps met a Heroic Spirit who, just like her, was used to modern society and that record was forcibly carried over by the special characteristic of the Chaldea-style summoning system as something useful, however it remains unknown whether that is the truth or not. She returns to her behavior of a "god/kami" that is her innate nature when she releases the True Name of her Noble Phantasm or when she gets serious, but usually, she's enjoying herself as a carefree "snake big sis". Furthermore, when she's in her juvenile form (the Saint Graph of her first stage), she displays a speech and conduct that is like a mix of "snake big sis Ibuki" and "Ibuki as a god/kami". The person in question saying "If I molt, it will get dangerous" is probably "Ibuki as a god/kami" speaking.