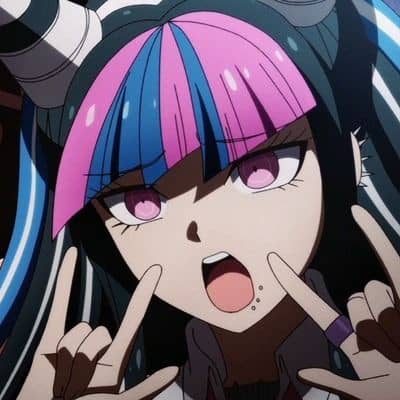 Ibuki Mioda, is a student of Hope's Peak Academy's Class 77-B, and a participant of the Killing School Trip featured in Danganronpa 2: Goodbye Despair. Her title is the Ultimate Musician. She, along with Class 77-B, return in Danganronpa 3: The End of Hope's Peak High School to explore their school life leading up to The Tragedy. She is a pale girl with pink eyes. She has long multi-colored hair consisting of black, pink, blue and white, some of which is tied into two oni horns on the top of her head. Ibuki has a style of clothing that is very unlike what one would think a Light Music Club member would wear. She wears a sailor uniform with a black pleated skirt and ripped thigh highs (the right one is pink and the left one is blue). Both of her ears have six needle earrings and an earlobe gauge. She also has three piercings under the left side of lip and black nail polish. She wears a necklace, a black scrunchie with a stitch-like pattern on her right wrist, a black and pink glove-like sleeve on her on her left upper arm with a silver bracelet and three silver rings on her left hand. Her shoes are white, with blue shoelaces on the right one and pink shoelaces on the left one. In Danganronpa 2, Ibuki has a scar tattoo with stitches on her left thigh. In Danganronpa 3, this same tattoo appears on her right thigh. As a member of Ultimate Despair, Ibuki has the same hair, but her clothes are different with more black. She appears to have a spiked collar and more piercings. When enrolled in Hope's Peak Academy, she wore a white button up dress shirt with a pink tie that has light pink-colored x's, a black pleated skirt with a thin belt, a blue scrunchie on her right wrist; a yellow spiked bracelet on her left, two black rings on her left hand and black thigh highs with white skeletal markings on them. She also wore the same necklace and shoes. At first, Ibuki is a bit shocking in bold and unique personality and appearance. She is one of the most upbeat people out of her classmates. She is very energetic and loves to talk, though she almost always ends up going off on bizarre, unrelated tangents. She forgets things quite quickly, so she tries to write memos to help her remember. Ibuki is very quirky as she loves to do all sort of bizarre things and she dislikes "dull" things, like reading and studying. She has a habit of breaking the fourth wall. When she gets upset, Ibuki seems to have a bit of a verbal tic: saying things twice. She also tends to scream or froth at the mouth when she panics. She seems to really enjoy panicking when there is no real danger, like when she's watching horror movies or going into the haunted house. In the official artbook, it's stated that Ibuki adores cute girls, and she's often seen admiring the other girls during the game. She can act flirty towards both boys and girls, though she often appears to be just joking. In the Island Mode, during a more serious conversation, she states that "there are more important things in this world than a temporary physical relationship" - she appears to have very little interest in having a lover. Instead, it's implied that she's much more interested in having a deep platonic relationship with someone she considers her soulmate ("band member", as she puts it). She also implies that she has felt despair around other people, but finding her "destined one" would make sure that she would never feel despair again. Despite her general quirkiness, Ibuki can be a startlingly wise and contemplative person, as in her last Free Time Events she gives Hajime Hinata advice about being himself. Though she may appear a bit insensitive at times, she is actually a very caring friend, as she spends her whole Free Time Events trying to help Hajime with his memories and sense of identity. She seems to have strong respect for individuality, which is contrasted with her Gullible Disease which makes her for the most part unable to act on her own will and also tones down her unique quirks. Ibuki often refers to herself in third person and calls everyone by their first name with "-chan" honorific in the original Japanese release. Ibuki also speaks in the third person in the English version, but not as frequently.