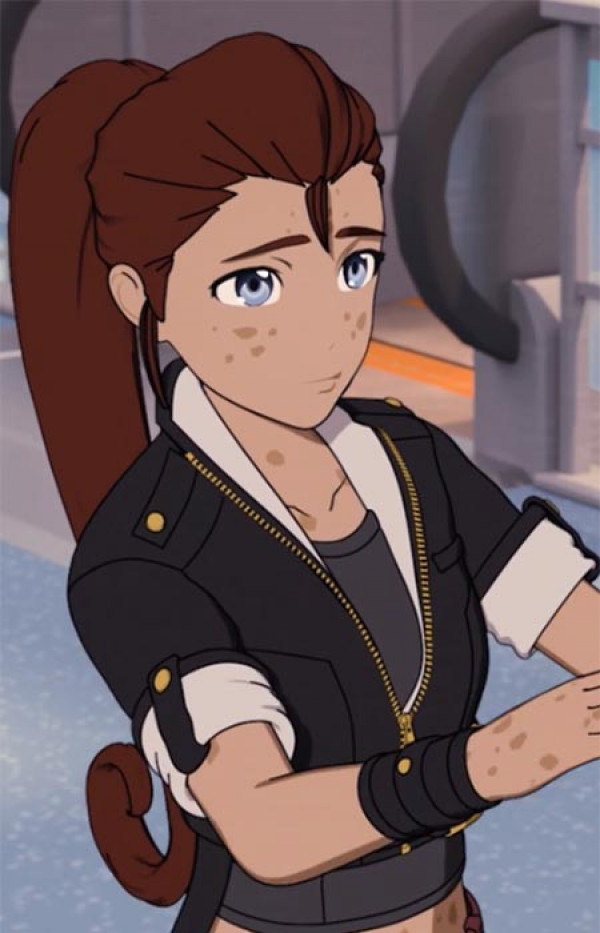 Ilia Amitola is a former member of the White Fang. She is first mentioned by Fennec Albain in "Menagerie" and makes her first appearance in "A Much Needed Talk". Ilia is a young woman and a chameleon Faunus. In her normal appearance, her skin has somewhat darker spots on her arms, legs, stomach and face. Her brown hair is tied back in a ponytail that curls at the end like a chameleon's tail, and her eyes are a light gray with a faintly bluish tint. Her Faunus trait grants her the ability to change the color of her skin, hair and eyes, allowing her to blend in with her environment. Her colors also appear to change in response to her emotions. As noted by her concept art, her body type gives her a smaller bust and rear. As a White Fang member, she wears a Grimm Mask with chameleon horns on it to hide her identity. Her mask also points upward at the top and extends past her hairline; this resembles the crest of a veiled chameleon. She wears a black, plum and navy sleeveless stealth suit with short legs. The suit has two parts to the bottom section - a navy blue front panel that matches her belts and a plum color to the rest. The color divide is at the center of her thighs. The stealth suit's zipper is gold, and over it, she wears navy blue belts with gold buckles. She wears simple black boots with a cuff and a black glove on her right hand. After the Battle of Haven, she wears a more casual appearance. She wears a short black jacket with two tails, with a gold zipper, buckle and buttons and with a white interior. She also wears a gray short top that exposes her midriff, maroon jean pants, black sneakers and a black matching wristband. When she is first introduced, Ilia appears to operate between moral grounds. While she hesitates to attack Blake Belladonna until "True Colors", she is not opposed to others doing it or herself harming others, such as Sun Wukong. Until then, she is willing to make personal sacrifices for the betterment of the collective so long as the collective is the Faunus, specifically the White Fang's goals, and not people in general. Ilia is a lesbian and was romantically attracted to Blake, but she disregarded her feelings for Blake during the time in favor of what the White Fang demanded. She used to enjoy blending in with Humans, even playing along with their anti-Faunus beliefs despite the hypocrisy. This stopped after an incident involving the deaths of multiple Faunus, including her parents, in a mining accident. The event served as a catalyst for her joining the White Fang. Ilia was also vindictive enough to assault her former friends in Atlas as they snickered at the losses sustained in the mining accident. Her loathing of Humans is not merely because of those who mistreat or segregate Faunus; it is also against Humans or Faunus who stand by and do nothing to help or improve the Faunus' standing outside of Menagerie. Ultimately, her righteous anger from her painful past has blinded her to the fact that her actions are based on revenge and will make her no better, perhaps worse, than those who wronged her. Ultimately, Ilia realizes her wrongs and seeks redemption, volunteering to stand with Blake and showing her moral compass has guided her back to the right path.