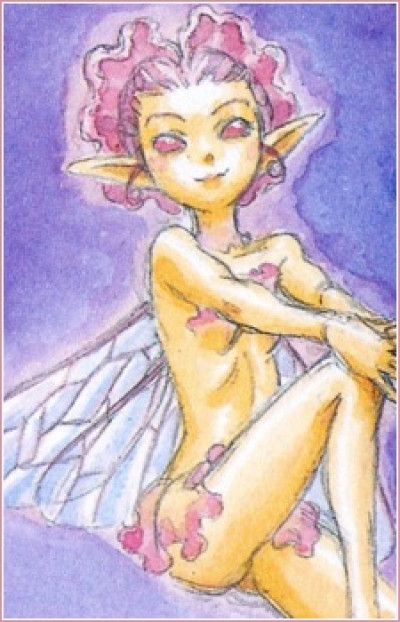 Ivalera, is an elf of the Pisky race, descendant of the ancient Spirits of the Wind. She is a member of Guts' Traveling Party and a lifelong friend to Schierke. As an elf, Ivalera is small and has two pairs of wings on her back. She is about the same size as Puck, but instead of having a green aura, she has a more feminine-looking pink aura. Also unlike Puck, she is not naked; she appears to wear some sort of halter and a skirt. Ivalera, as other Piskies (and possibly every other Elf in the Berserk world) is an empath, able to feel the emotions of others. In time, Ivalera learned how to "finetune" this ability with the feelings of Schierke, acting in a protective, almost motherly way to protect her from distress, and counseling the other members of the party on what to do when Schierke, overexerting herself, falls in a state of trance too deep to awaken alone. Outwardly more serious and reliable than Puck, Ivalera often share with him moments of bickering and fighting, enhancing their value of the "comic relief" characters. Ivalera's relationships with the rest of the party members apparently mirror the ones Puck had already created with his teammates. Essentially, Ivalera acts as Schierke's devoted best friend and the voice of her "inner-thoughts." Ivalera's initial mistrust toward Guts was a way to protect her companion, much like how Puck's over-eagerness was a way to protect Guts from his inner demons. As Puck has a bossy, but warm relationship with Isidro, trying to mold him as young adult and warrior in his own, silly way, Ivalera has a similar relationship with Farnese; upon discovering her desire to learn magic from Schierke, Ivalera started to frequently tease the noblewoman, playfully likening her status to that of an "apprentice" and "servant maid," when it came to her duties with Casca. Interestingly, Ivalera does not exploit nor abuse Farnese, which contrasts the way Farnese used to treat her servants, especially Serpico. As Isidro and Puck find it really difficult understanding the serious demeanor of Schierke and Ivalera, Ivalera finds herself greatly disturbed by Isidro's attitude, sharing with Schierke their common impression of the young boy as an "incompetent monkey." Albeit she is of the same race of Puck, she tries her best to be better than the average Pisky, seeing herself as more serious, reliable and well-educated than the light-hearted, fun loving members of her race. This parallels Schierke's attitude toward Isidro. Thus, Ivalera often bickers with Puck. In such occasions, she reverts to the nonsensical attitude of a regular Pisky, even gaining a super-deformed "chibi" alter ego just like the one Miura uses to highlight Puck moments of silliness