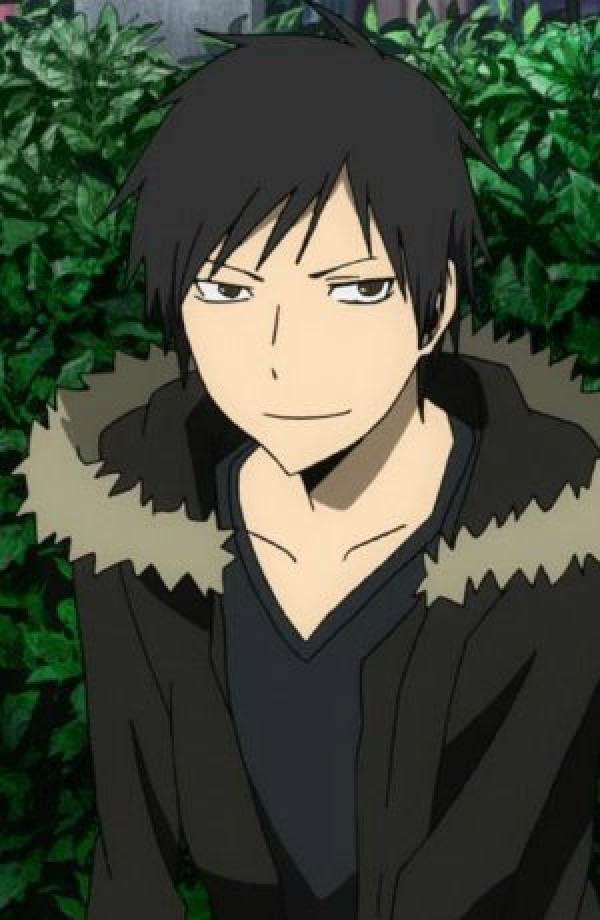 Izaya is a powerful and skilled underground information broker. He usually gives information for his own enjoyment, and he claims to love the entire human race, excluding Shizuo Heiwajima. He is one of the main antagonists in Durarara!!, one of the founders of Amphisbaena and Heaven's Slave, and a member of the Dollars. Izaya has short black hair and brown eyes. He is repeatedly described as a fragile-looking, handsome man with a beautiful face by other characters in the novels. However, he is also described by the same characters as appearing mischievous or otherwise unsavory. His regular outfit consists of a black coat with brown fur lining that goes down to his hips, along with a plain black long sleeved v-neck, pants, and dark brown shoes. In the novels, he occasionally dons a longer version of his coat that reaches down to his ankles. In one OVA episode, he is shown to wear a lighter short-sleeved hoodie in warmer weather. In the manga, he goes through many variants of the same coat. They often differ in length or where the lining is, e.g. in some versions it will lack fur on the cuffs or hem. Izaya claims to love humanity, although his definition of "love" is much different than one would assume. What he specifically loves about humanity is the unpredictability of human nature, and he greatly enjoys putting people in enjoyable or chaotic situations in order to observe their reactions. With a thorough understanding of human behavior and tendencies, he is able to determine people's thoughts and predict their reactions with high accuracy. Izaya is cunning and charming, but his manipulative nature prevents him from making any genuine or lasting bonds with others. He has a jolly and mocking personality, speaking informally with most people as if they are close friends and often using nicknames. According to his father, Shirou, at a young age Izaya had no interest in interacting with others, to the point where his parents began to worry. Up until middle school, Izaya was a model student: the vice president of the elementary student council, the star at sports meetings, and winning independent research awards, poetry awards, slogan awards, and participating in essay contests. This, combined with his good looks and a respectable family, made him well known, especially with his girl classmates. However, Izaya was not particularly loved or hated since he went through school life in a withdrawn state, preferring to observe everything from afar, carrying out his life philosophy to be 'neither too close nor too far' from the others.