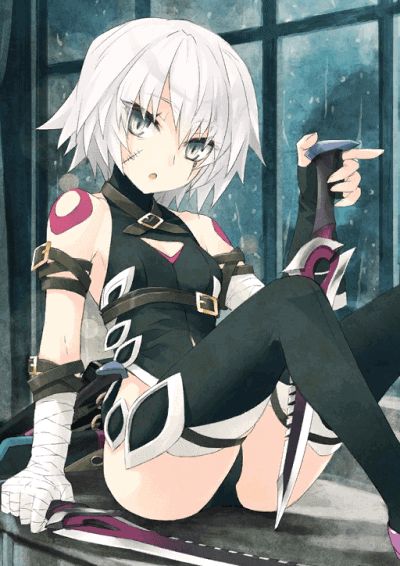 Jack the Ripper, Class Name Assassin of "Black", is the Assassin-class Servant of Reika Rikudou of the Black Faction in the Great Holy Grail War of Fate/Apocrypha. Originally summoned by Hyouma Sagara, Reika becomes her Master shortly after. She is one of the Servants of Ritsuka Fujimaru of the Grand Orders conflicts of Fate/Grand Order. Jack has the appearance of a white-haired (lavender in the anime, and promotional and supplementary materials) girl with green-yellow eyes, with stitched-up scars on her face. Her upper body is that of a adolescent, while her lower body is more mature like that of an adult, creating an odd juxtaposition to her appearance. She dons a black vest, black panties and black stockings with pink shoes. Both her arms are bandaged but only her left hand wears a glove. She has a purple oval-shaped 'O' on each of her shoulders. At the small of her back she carries a number of sheathes that holds her knives. In her first stage in Fate/Grand Order and in the anime, she wears a tattered coat as a cloak over her outfit. She is a young girl who embodies contradiction itself, combining the dual natures of "day" and "night." She displays a childish manner of speech, but she is truly quick of thought. Rationality dominates her behavior, but there are many inherent weaknesses to her psyche. Her personality is both pure and cruel, and she is inclined to repay cruelty with cruelty and benevolence with benevolence. To her killing is no different than it would be to pick a flower or step on an ant. Her psyche is inherently broken, and mistreatment toward her may result in irreversible deterioration. She uses first person plural pronouns, such as "us" and "we", to address herself, and often lamented the fact that all of the voices she heard on the streets would never mourn "them." Due to her time on the streets, her ultimate wish from the Holy Grail is to return to the safe and comfortable warmth inside her mother. This desperate wish was the driving motivation behind the murders. While dissecting the women she labeled as her "mother", she would constantly apologize that she wants to "go back" while crying and rubbing a part dissected from the woman against her face. Rather than continue on the cold streets, she wished to return where it was warm. As a child that was never loved, she strongly seeking out for love. Regardless of whatever the Master is male or female, she will probably demand his/her love as a "mother". While there is no problem in responding to that love, she might intend to sneak into your abdomen. Considering that, the compatibility between Jack and their former master Hyouma Sagara was pretty much the absolute worst possible—or rather, perhaps it is better to say that all magi have the worst compatibility with Jack. Reika Rikudou is the only Master that is compatible with the existence known as Jack. While she fawns over her wounded Mother, Reika Rikudou, she easily turns cold and maims her proper Master, Sagara Hyouma, with ease before returning to her concerned filled expressions towards Reika. After casually devouring him, she turns childishly bashful and asks Reika to pat her head. Despite becoming easily flustered by Reika's question a moment earlier, she can just as easily casually rip out and eat the hearts of loan sharks without any expression. She is extremely affectionate and childlike towards her Mother, but cruel and ruthless towards others. Reika feels that the Servant's disposition sometimes matching that of the Master is true in their case. She, who does not truly feel alive, and Jack, for whom the word "alive" may not even be applicable, met due to fate. She is surprised by the notion of having a home to return to after having lived out on the streets her entire life. Remembering her desperate struggle for survival, she cannot help but feel that "going home" is an occasion that has nothing to do with her. While Servants do not require food to survive, Reika tells her that she is going to cook dinner for her. While she is initially unresponsive to the idea, once Reika tells her it's a reward for her work, she smiles happily and dances around in joy.