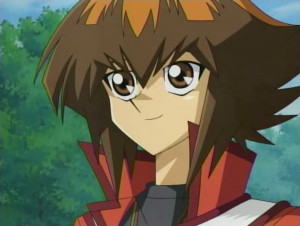 Jaden Yuki, known as Judai Yuki in the Japanese version, is the protagonist of Yu-Gi-Oh! GX.He is headstrong, optimistic, fun loving, and a talented Duelist who loves Dueling as much as he cares for his friends.He attended Duel Academy and was put in the Slifer Red Dorm, the dorm with the least privileges, due to his poor grades in the entrance exam. As time goes on, he becomes the academy's best Duelist and saves the world and the academy from many threats Jaden is friendly, optimistic, laid-back, enthusiastic, kind, confident, funny, and very passionate about Dueling. Jaden loves Dueling and believes that all problems can ultimately be solved through it. He keeps going no matter how hard things get or how hopeless it seems, with a few exceptions (though it doesn't take much encouragement for him to start fighting again), although he does sometimes doubt himself. He always shows respect towards his opponents, with a few exceptions, even complimenting them during a Duel. Jaden shows little interest in areas outside of Dueling, which extends to his classes. When he chooses to attend them, he generally falls asleep. Despite his low grades, he is still regarded as one of Duel Academy's best Duelists. However, this attitude eventually shows itself as one of his greatest flaws.One of Jaden's common traits is that he tends to make jokes or puns, even in some situations where it is not appropriate. Most of the jokes he makes are Duel-related but on a few occasions he does make jokes at someone's expense.Jaden has a close bond with his cards, to the point where he has no problem with an opponent insulting him, but is angered when they insult his cards.He is also fiercely loyal to his friends. Jaden's usual outfit consists of the standard Slifer Red uniform, unbuttoned, and a black shirt underneath. In the fourth season, the normal Slifer Red white pants were replaced by dark jeans. A Deck box is strapped above his waistline, largely hidden beneath the lower rim of his jacket. In the first episode he is seen wearing a high school uniform similar to the one worn by Yugi Muto, though colored black instead of blue. He also wore a KaibaCorp Duel Disk on his left arm for his entrance exam Duel. His brown eyes are positioned directly beneath the bangs of the layer closest to his face. After joining Duel Academy, he carries an Academy-issued Duel Disk on his left arm.In the fourth season, Jaden is seen with his new look, but he is still easy to identify from the past seasons. He comes back with longer hair, a longer, darker Slifer Red jacket and darker pants Source:http://yugioh.wikia.com/wiki/Jaden_Yuki