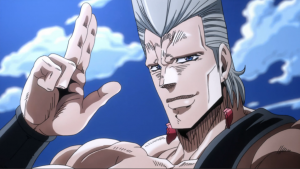 Jean Pierre Polnareff is a boastful but honorable and well-meaning Frenchman. Polnareff's most defining trait is his honor. His first appearance has him handicap himself on purpose by explaining his ability and fight his opponent Avdol in a terrain more suitable to the latter. Polnareff's honor is such that even under the control of Dio, he refuses to do something as dishonorable as attacking someone from the back. Adopting a chivalrous mindset, Polnareff is reluctant to flee from a fight or use dishonorable tactics, although he can be persuaded. He is in fact somewhat happy to see Chaka challenge him directly. Polnareff is also very eager to avenge his fallen loved ones, for instance traveling the earth to search for the one to have killed his sister Sherry. Polnareff is well-meaning and will also sacrifice a potential romance so his enemies won't harm an innocent woman, the most notable case with Maléna, whose kindness towards him when Alessi's stand caused him to shrink into a child moved him. Likewise, Polnareff comes off as arrogant, confrontational and can be rather impulsive. He is very proud of his Silver Chariot, with good reason as he trained hard with it, but his overconfidence unfortunately means that he is poorly suited to fight the cowardly Stand users on his path, as he doesn't expect their moves and leads him into a number of disadvantageous positions, notably against Hol Horse's Emperor or Anubis. Polnareff has trouble seeing his own faults, and thinks of himself as better as he really is, having once noted the carelessness of throwing a lit cigarette butt on the ground, a cigarette he threw and which caused a fire. During his journey, it isn't unusual for Polnareff to argue with his companions or run afoul of various people he meets. He also initially held a poor view of Avdol, as he fled DIO instead of fighting, .and had an argument which severed his relationship with him. Likewise Polnareff attacked Iggy upon their first meeting. Polnareff is also the least serious member of the group. He is maybe the one who bonds the most with his companions, casually joking with Kakyoin, Joseph and even Jotaro. Being very extrovert, he has no problem expressing joy or sorrow, thus is the most compassionate of the group, being the one who mourns his comrades openly. This trait pushed the other members of the third Joestar Group not to reveal Avdol's recovery to him as they feared he would spill the secret. Polnareff is somewhat easily distracted and repeatedly finds a way to lighten the mood, cracking a joke in sign language with Kakyoin while the submarine they were in was being sunk, being willing to taste a homemade baby food from Joseph and somehow coming to believe in Judgement's power as a genie, asking for becoming a comic book artist greater than Disney. In fact Polnareff references pop culture icons frequently, such as Tom & Jerry, or The Exorcist. He can be unintelligent but in battle has shown surprising intellect, strategy and instinct. Polnareff fancies himself a ladies' man. This is in part due to having mild narcissism, often considering himself a handsome man and takes special pride in his hair. A woman's good looks are always enough to distract him from even the most serious subjects, leading to Joseph commenting that Polnareff thinks with his crotch. Indeed, even his infant self was already delighted to bathe with a beautiful woman. Usually a very perceptive fighter, being able to sniff out Devo, Chaka and Alessi, he seems to be unable to think that a woman would ever be evil, like with Nena and Enya. Polnareff is very friendly with the women, giving love advice to Nena and trying to bond with Enya (though it unintentionally enraged her). (This waifu has been approved by mods.)