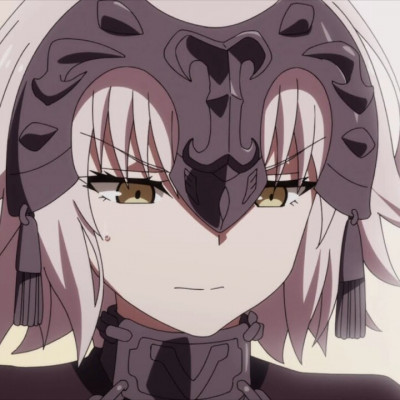 Jeanne d'Arc Alter, Class Name Avenger, is an Avenger-class Servant summoned by Ritsuka Fujimaru in the Grand Orders of Fate/Grand Order. She is also a boss-only character under the Ruler-class during the events of the Orleans Singularity. Jeanne Alter has the same appearance as the original version of her, except with pale complexion, yellow eyes, cut short white-blond hair, and a darker color scheme for her armor, flag, and cape. From stage 3 onward, Jeanne Alter's armor becomes more revealing, and her shoes now become high heels. Notably, she now has long flowing hair that reaches her ankles. A black Jeanne d’Arc dyed in a desire for vengeance. Her personality is extremely cruel and stern, and probably a few people would notice the vestiges of her sainthood in there. She has no kindness towards others, and she will become an object of revenge towards all of mankind. She always harbors distrust towards her comrades and her surroundings. She believes in God and yet, there is no faith in that belief. She likes to deny God in front of a believer, thinking that there is no better entertainment than that. She dislikes the act of "having faith", for it is evil as far as she is concerned. She will wage war with her companions against God, and she will simply take pleasure in the slaughter for her "cause". The being within her has a liking for complete and utter devastation, and that would even include the destruction of mankind—the purpose of her life is to keep on killing whatever comes her way, until she uses up all her strength. With several circumstances accumulating, despite being a fictional existence, it became possible for Jeanne Alter to answer the summons as a black holy woman. The particulars of her summoning may be extremely unclear, but she will not rebel immediately after her summoning. However, seeing that it is a human Master, she will constantly harbor distrust. Also, when she becomes highly tense, she will start to fanatically laugh. Jeanne Alter is fundamentally bitter towards the Master, but maybe due to how the holy woman Jeanne, who became her basis, was quite the softhearted one, one can perceive respect and affection for her Master at her core. She has no girlish hobbies, but it seems that there were some maiden-like wishes. "To think that, in the depths of her consciousness, she wants to perform a strained avenge business while being surrounded by handsome men of her own liking!" - such is the comment from a Servant of the same Avenger Class.