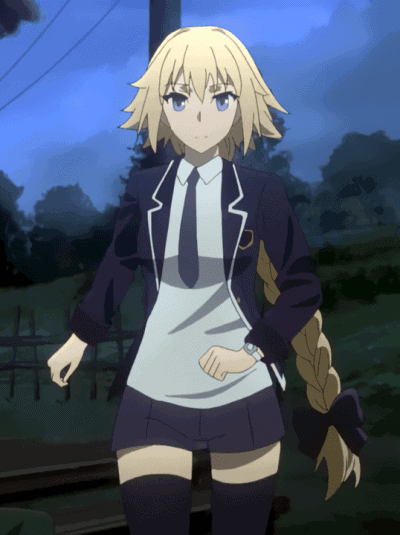 Jeanne d'Arc, Class Name Ruler, is the Ruler-class Servant in the Great Holy Grail War of Fate/Apocrypha. Ruler is the heroine of Fate/Apocrypha. She is one of the Servants of Ritsuka Fujimaru of the Grand Order conflicts of Fate/Grand Order. Ruler possesses the body of a French girl named Laeticia whose physical build, spiritual build, personality and Magical Energy were compatible to her. But her bust size alone is just slightly bigger than Jeanne d'Arc. Her eyes were described as amethyst-colored eyes and they were completely pure. She didn’t have the precise and moulded beauty of a homunculus or the kind of cuteness that made one’s heart flutter just by being nearby like Astolfo. She possessed a wondrous beauty that scarcely felt real. In her battle mode, she can transform into her battle-dress with armour woven from Magical Energy to enclose her. Under her gauntlet, she has Command Spells engraved on her hand, whereas those special to command the Servants during the Great Holy Grail War are printed on her back with a similar shape drawn that of an angel. Although Gilles mistook King Arthur as Jeanne d'Arc, the main difference between her and King Arthur's appearance is sex appeal. Jeanne is described as a taciturn and cool girl when acting as a Servant, but her natural self is a plain and quiet sixteen-year-old girl. She puts order first, and will wield a sword for the sake of the rules, but fundamentally believes "all people and Heroic Spirits participating in the Holy Grail War are important". Jeanne and her host, Laeticia, do not share two personalities in one body, but rather their personalities are merged into one. Due to her faith, Laeticia accepts Ruler into her body completely. While Ruler remains the main dominant conscious, Leticia's consciousness still lingers. In particular, Laeticia serves as the base for Ruler's knowledge that concerns matters outside of the Holy Grail War. She had never been able to read or write while alive, but she gains the ability to do so through Laeticia. Occasionally the possessed Leticia would affect the possessor Ruler. For example, Leticia is bad at handling men so her influence would affect Ruler. Ruler could not interact normally with Sieg when they stayed together in Serge's house unless she maintained a certain distance. She has no wish for the Holy Grail but if there were to be one, it would only be that the Greater Grail War be conducted correctly. She doesn't mind if the person wishes a personal desire in front of the Holy Grail. As long as it doesn’t beckon the world’s destruction, she would properly respect the wish. She doesn't have a single regret regarding her lifetime. She does not wish revenge or wish to be saved and it was enough for her to know the life that she lived alone. In Fate/Grand Order's "Little Santa Alter" event, Jeanne says that when she was young her greatest wish was to see the ocean. She does not believe that God had forsaken her in her last moment but rather that the Lord has never forsaken a single person. There was just nothing he could have done. Praying, giving offerings, everything is an act not for oneself, but for the Lord. She believes prayer will heal the Lord's laments and sorrow. The moment her prayer began, she became separated from the world—removed from the past, the future, and reality itself. She was there not for any particular purpose, but simply to offer a prayer to God. By doing so, the course which she ought to take would come to be fixed. To her, every second of prayer is as important as every breath she takes; a day will not pass where she does not pray. She had a strange habit of comically poking Gilles in the eyes when ever he was least suspecting. The "Servant Summer Festival" event in Fate/Grand Order reveals that Jeanne has a talent for drawing and feels great joy whenever she brings a story to life by drawing a manga. She even says that if she were just a normal person and not a Heroic Spirit, making manga is what she would want to do with her life. Jeanne also has a strong desire to be an older sister, referring to Ritsuka Fujimaru, Jeanne Alter, and Jeanne Alter Santa Lily as her younger siblings. In real life Jeanne d'Arc was the youngest of five siblings. In the Orleans Singularity Jeanne tells Marie Antoinette that when she was a child she was considered one of the boys by the other kids, and in Fate/Zero material Gilles is described as liking boyish girls. In "My Room" in Fate/Grand Order Jeanne says that she can't resist lying down to sleep in a pile of hay. In "My Room" in Fate/EXTELLA LINK she says that sometimes she would lean against a tree and stare at the sky while her chores went undone.

No images found
Want to see more from the gallery? Register or Login
blonde hair