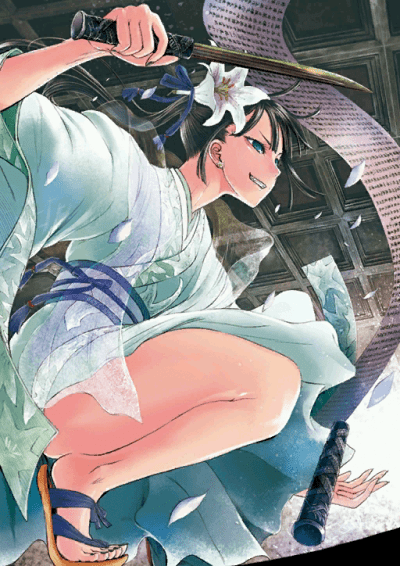 Jing Ke, Class Name Assassin, is the Assassin-class Servant summoned by Ritsuka Fujimaru in the Grand Orders of Fate/Grand Order. Although history claims Jing Ke as a man, Jing Ke is actually a woman. Jing Ke is a slender woman with rather toned thighs. Her eyes are sharp and teal colored. Her black hair is tied slightly to the side into a long, thin ponytail that reaches her legs, with a few bangs over her forehead, and two longer ones on each side. Her nails appear to be painted in a grayish tone, and her feet wear sandals. Jing Ke's outfit consists of a seemingly multi-layered kimono, the most out of layers with wide trimmings with a floral pattern. A symbol of a lily is drawn over the waist area, underneath the blue and white sash. The sleeves of the Kimono are rather large, resembling a yukata. A piece of string is also tied around her waist. In her second Ascension, the trimmings of Jing Ke's sleeves extend, she now wears a see-through ribbon similar to that of a Nio statue, and a Lily flower in full bloom lays on top of her head, off to the right side. In her third Ascension, Jing Ke wears a chest armor piece held by a string, her left hand holds a grotesque, golden brown mask, and her right hand now holds her Noble Phantasm, the dagger Only For Killing. Although famed for being an assassin, Jing Kei was also a hedonist individual, who loved reading, swordsmanship, chats with her wise friends and, more than anything, alcohol. During Santa Alter's delivery of presents, she spends seven days drinking to cope with being swindled by Caesar, and is highly intoxicated by their arrival.