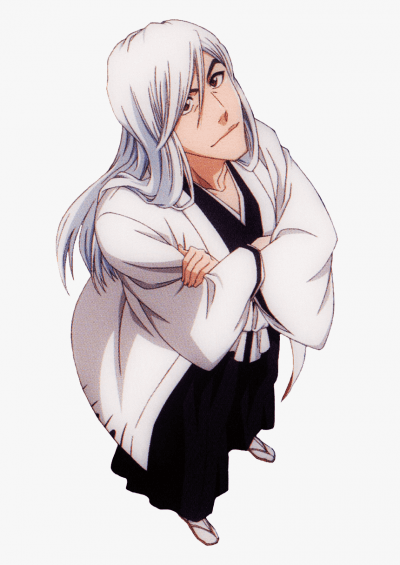 Ukitake's favorite food is ohagi. In his free time he feeds the carp in the lake of Ugendō's garden and also trims the bonsai there, despite lacking the artistic sense necessary for the latter. He also writes a novel series in the Seireitei Communication titled "Sōgyō's Refusal!" (双魚のお断り！, Sōgyō no Okotowari!), in which the lead character, Sōgyo, fights evil and saves innocent villagers. Sōgyo's catchphrase is "I refuse that!" (そいつはお断りだ！, Soitsu wa Okotowari da!) and is hugely popular among the children in Seireitei. The serial is frequently on hiatus, but when it is in the magazine, it ranks in the top three features. Ukitake is well-respected and highly honorable, and always treats those around him with respect, even those who are weaker or not as highly ranked as he is. As a result, he can be easily approached by other members of Soul Society who seek favors or advice from the captain. Due to his high moral code, Ukitake will never let any harm come to either his underlings or those who attempt to protect them. He refuses to give up when he believes something is wrong and will break a rule to do what is right. He is also quite perceptive, as seen when he analyzes the various disturbances caused in Soul Society, and has the ability to correctly judge people's character, as noted by Yamamoto, and knows when they are lonely. He observes that, before meeting Ichigo Kurosaki and his friends, Rukia often had trouble opening up about certain things and was very lonely, but sees a difference in her when she spends time training with Orihime. Ukitake has on occasion given people strange or unwanted gifts for no apparent reason, particularly Tōshirō Hitsugaya because of their similar sounding names and hair color. Due to his long-standing position with the Gotei 13, Ukitake is one of the most proficient combatants in Soul Society and always maintains a level of honor and integrity when engaging in battle, much like his best friend Shunsui. He refuses to fight with a child or even in the presence of a child, even if that child is an Arrancar. He always maintains a semblance of respect for his opponent and is polite in combat situations. He also has a high measure of mercy.