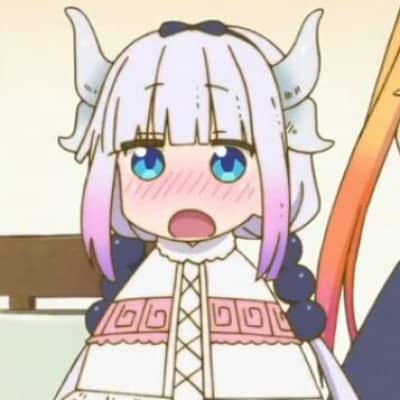 Kanna Kamui also known as Kanna Kobayashi, is one of the main characters in Miss Kobayashi's Dragon Maid and is one of the main characters in Miss Kobayashi's Dragon Maid: Kanna's Daily Life. Kanna is a young female dragon, who was exiled from her world as a consequence of her pranks. In her human form, Kanna has white-lavender hair in ponytails and blue eyes. According to Riko Saikawa, she is very cute and appealing. Her style of clothing has been described as "gothic lolita with a tribal theme" (courtesy of Kobayashi). Her usual attire consists of a white capelet with a fur collar, a pink blouse, a white frilly skirt, and pink doll shoes. She ties her hair into pigtails, each adorned with three dark blue beads. In her dragon form, she appears as a feathered white dragon with blue eyes. Like Tohru, she hides her tail and wings when outside. Unlike Tohru, she also hides her horns when outside. In the anime, Kanna's hair is given an extra shade of purple at the tips. Kanna wears a light pink frock in place of her usual clothing during the summer months and a yellow nightgown to sleep. Her height is 120cm while in human form and 10m as a dragon and her measurements are B60/W50/H55. Kanna is soft-spoken and quiet and demonstrates most of her emotions through minute expressions. Despite being technically older than her human peers, Kanna behaves no differently from a human child as she easily tires of routine and enjoys playing games. However, despite her generally unexpressed and implicit demeanor, Kanna is not without emotion, indicated when she has a sudden outburst and cries when Riko Saikawa initially views Kanna as a rival instead of being friends. Kanna may also have romantic feelings for Riko, expressing a desire for a similar relationship to what Kobayashi and Tohru have. Additionally, Kanna is thankful for their friendship. According to Tohru, she is quite mischievous and enjoys playing pranks, though this was an ultimately futile effort to obtain her parents' attention. When Kanna arrives in the modern world, she is initially distrustful or curious about most belongings in the modern world but is revealed to enjoy many things she discovers. Once Kanna discovers something she is attracted to, she becomes very possessive, indicated when she refuses to leave Kobayashi, despite having a distrustful attitude towards her before. She appears to be attached to many other individuals as well, such as Tohru, and briefly Riko Saikawa. Kanna is naturally observant and curious but is confused as to how she should react to the modern world, questioning as to whether or not she gets along with her classmates.