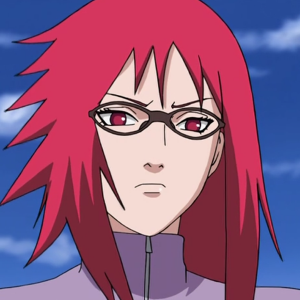 Karin is a subordinate of Orochimaru, a former kunoichi of Kusagakure, and a member of the Uzumaki clan. She assisted Orochimaru in his experiments, and was left in charge as warden of his Southern Hideout while he was away. She was later recruited into Sasuke Uchiha's group Taka, which was initially called "Hebi" at the time of its creation. Karin has crimson eyes, fair skin, and the characteristic red hair of the Uzumaki clan which she wears in an unusual hairstyle: her hair is short and spiky on the right side, while longer and straight on the left side. She wears brown narrow glasses, which have a serrated blade hidden in them, and her outfit consists of a lavender uniform that exposes her navel, short black shorts, and long black thigh high stockings with black sandals. Her chest, neck and arms are covered with bite marks that result from people biting her to heal, and all of which are hidden by her uniform. As she is allied with Hebi, Karin begins to wear a pouch around her midsection, and later a black cloak. When allied with Akatsuki, Karin wears an Akatsuki cloak with a hood instead of a high collar. After the fight with Killer B, Karin briefly put her hair in a ponytail. She is seen wearing a black dress and black-rimmed glasses when it's decided that Taka will go to Konoha. Years after the Fourth Great Shinobi War, Karin began wearing a long sleeved white shirt with a purple tie and black cuffs on her wrists, black boots, and black shorts, and has also shaved the left side of her head. Her body also apparently healed from all her bite marks. When Karin was still living in Kusagakure, she wore a mesh shirt and stockings, a purple skirt, a light brown short sleeved jacket with an orange stripe going across the chest, and black sandals. She also had the Kusagakure forehead protector on her forehead. As a child, Karin had short hair that reached her chin and wore a dark purple short sleeved shirt that had a brown collar, light brown pants, and brown sandals. Karin has a fluctuating personality; she will appear tough and in control at times, to the point of being violent and critical, and at other times will appear highly flirtatious. She possesses a strong dislike towards Suigetsu Hōzuki, whom she attacks whenever he decides to mock or berate her. In the anime, she stated that she was attracted to men based on their chakra quality, and claims that Suigetsu's chakra disgusts her. Sasuke Uchiha's chakra used to dazzle her, but it now scares her, due to it getting colder and darker from his hatred. Naruto Uzumaki's seems to calm and dazzle her as well, making her feel comfortable and relaxed due to it being warm and bright, though she also became scared after sensing an evil chakra within him. Karin develops a fondness for Sasuke from the first day they met; when he saved her life during the Chūnin Exams. In the anime, she has a flashback of when Orochimaru sends her to assist Sasuke in capturing a horde of escaped prisoners. There, she is captivated by the level of Sasuke's chakra and develops a sexual attraction to him. Karin's strong fondness bordered on fanaticism. For example, it was revealed that she had kept one of Sasuke's sweat-drenched shirts. Karin would typically insist that she has no feelings for Sasuke around others, while frequently suggesting to Sasuke that they should spend time alone with the intention of freely expressing her feelings to him, only to switch back to acting cold when other people are present. Despite Sasuke's chakra becoming increasingly "darker", she still found him attractive. However, after he stabbed her in order to kill Danzō and tried to kill her, then even ordering Sakura to kill her to test Sakura's intent to join him, Karin stated that she no longer cares about him. Karin has also used others' perception of her feelings towards Sasuke to her advantage, feigning mental instability while imprisoned at Konoha to make the guards pay less attention to her. Upon her escape, she follows Sasuke's chakra with the intent of aggressively confronting him about the stab as she vents her rage by furiously beating Suigetsu, but with Sasuke's apology and Orochimaru's suggestion, she found herself unable to stay angry. She even puts Sasuke's well-being above her own. Despite not being a combatant of Taka, she rushed into the battlefield with virtually no weapons or protective gear when she senses that Sasuke was on the verge of death, paying no heed to how strong the enemy was. In the anime, as seen in her Infinite Tsukuyomi dream, her greatest desire is simply to see Sasuke smile kindly to her. Years later, despite still having feelings for Sasuke, Karin is content with the knowledge that he is happy with his new family. Karin also seems to have a soft spot for Sasuke and Sakura's daughter, whom she helped deliver when she was born, and was the one who gave their daughter a pair of glasses. Her temper has also lessened and she has more amicable interactions with Suigetsu Hōzuki.