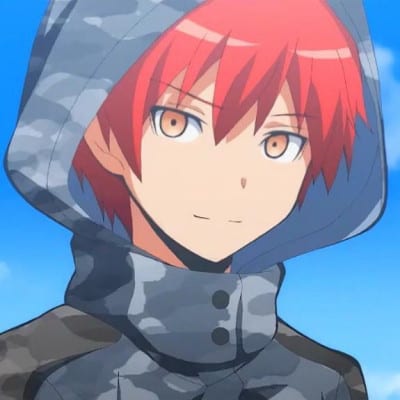 Karma Akabane is a student in Korosensei's Class 3-E of Kunugigaoka Junior High School who had been suspended from school due to his violent behavior and one of Nagisa's closest friends. Karma has pale skin, short red hair, and pale sharp eyes that appear as either mercury or goldish in color. Behind his usual innocent-looking, smiling face hides a torturous and rather sadistic personality. He has a slender build and has also been shown to have exceptionally sharp canine teeth. Among all the Class 3-E students, Karma is the only one to wear a black blazer as opposed to the standard school-issued uniform. In the anime, Karma is considered to be the most physically attractive out of all the boys in Class E by the girls. Seven years after graduation, Karma has grown considerably taller and has swept-back hair. His eyes also appear moderately less threatening. Karma is well-known throughout the school for his violent behavior and troublesome attitude. He is quite cunning, mischievous, and somewhat sadistic, usually playing foul, tricking, and at times manipulating, humiliating and fighting others. He has been described by Karasuma as "at first glance, he comes across as being a lazy sort, but there's a strong sense of mischief in his eyes", and Itona has described him to have "certain vision" to Terasaka. Karma is quite relaxed most of the time as he occasionally skips out on things he finds boring, such as the school assembly. However, he has become considerably more hard working at studying after the embarrassing exam arc although he hides it by making it look like he was playing video games. Unexpectedly, Karma is a fan of superhero movies, like Sonic Ninja. Despite his somewhat sadistic nature, Karma actually has good values behind his motives, and can be quite empathetic. The reason he was placed in Class E was that he had rescued a senior from Class E being bullied by students from the main building. He is, unlike his former classmates, unprejudiced against Class E. He believes each and every one of them have their own special talents and will defend them, especially against Class A. When he was in the main building, due to the betrayal of his most-trusted homeroom teacher, Karma began to hate all people who called themselves 'teachers' and as a result, he had almost zero respect for any adults. However, Karma has become more objective after meeting Korosensei, now respecting more of his opponents' and teachers' strengths and weaknesses. Karma has shown to be more than capable of respecting and caring for other people, as he greatly cares for Nagisa who seems to be his friend, and has grown attached to his classmates and others: he is best friends with Nagisa, he gets along with Okuda and Nakamura, often teases Terasaka, and respects Asano Gakushu and sees him as his intellectual rival. He also forms a bond with Korosensei, breaking down crying when he died. However, Karma also tends to be quite impulsive, to the point of becoming truly brutal and cruel when fighting with people who threaten him or any of his friends from Class E.