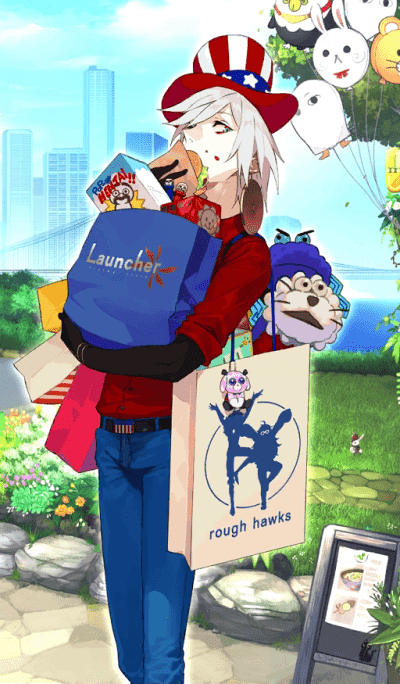 Karna, also known as Lancer of "Red", is the Lancer-class Servant of Feend vor Sembren of the Red Faction in the Great Holy Grail War of Fate/Apocrypha. Shirou Kotomine assumes command over him before he even meets his Master, and through his machinations he later officially becomes Lancer's Master. He is also the Servant of Jinako Carigiri in the Moon Cell Holy Grail War of Fate/EXTRA CCC. Under Jinako, he is called Launcher due to Jinako having had modified his status to a made up Servant class based on Brahmastra being a beam-like attack. He is summoned by Ritsuka Fujimaru in the Grand Orders of Fate/Grand Order. He is described as a young man with long and white unkempt hair that almost appear transparent. His gaze is said to be sharp like a steel blade with the red stone buried in his chest similarly projecting an enthralling lustrousness. It is also specified that what draws the eye more than anything else is the set of golden armor that he has become fused with, giving off a divine radiance. While every single part is said to be beautiful in its own right, once combined with Lancer they exude far more ferocity than attractiveness. His personality is cold and unforgiving. Although conversing with him may give the impression that he is indecisive and somewhat boring, in reality he is always deep in thought and has a loyal heart. He gives an impression of being cold and cruel because he believes that most things and events are “normal”, and therefore he does not interfere. Due to this characteristic, he does not really have negative emotions such as hatred and jealousy. Because his behaviors target people’s “true nature that should not be put to words”, he is disliked by many. Karna’s strongest weapon was his ‘will’. Possessing a strong will and a strong heart, he was the Hero of Charity who had never resented a single person despite experiencing all kinds of misfortune. He was a man who had given things special than anyone else, but never once was treated special himself. Neither proud nor arrogant, he was a hero who merely carried out a way of life that would not shame the name of his father from the moment he was born to when he was finally shot down. Karna would follow the orders of his Master with no particular objections. On the other hand, Karna is to put in the simplest term: a soldier. When commanded, he behaves as though the very concept of defiance does not exist. To the Lancer of Red, there is no liking or disliking to an order that has been given to him, to the point he will just ignore to consider how said order relates to the situation, as only the fact that he serves the Master who summoned him is what is really important. In other words, he does not raise objections about orders, as those thoughts have already been removed from his mind. Even so, he shows some small doubts regarding the elimination of Jeanne given her task to preside over the war, but he convinces himself that as defeating a Ruler would be a very difficult endeavor, that makes all the more reason why would be worth fighting her. He has no wish for the Holy Grail, but he desires to battle Siegfried once more and to save his Master.