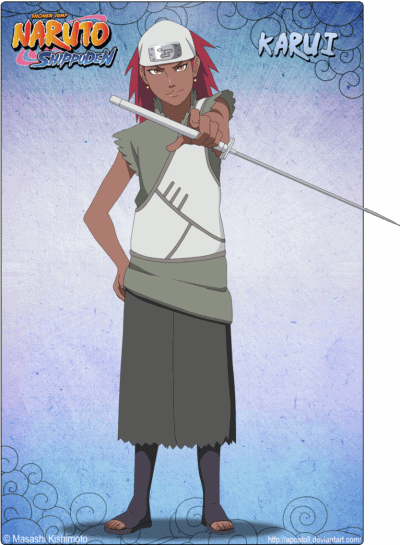 Karui Akimichi is a kunoichi from Kumogakure, and a member of Team Samui. She would later marry Chōji Akimichi and emigrate to Konohagakure, thus becoming a member of the Akimichi clan. Karui is a dark-skinned kunoichi with long spiky red hair and amber eyes. As noted by Omoi in Part II, she was flat-chested. She wears a long, short-sleeved dress with frilly edges complete with the Kumogakure flak jacket, two simple yellow earrings, fishnet stockings, thigh-high boots with white soles and a forehead protector which she wears like a bandanna. She also carries a long sword on her back. As an adult, Karui figure has a more feminine figure and her hair has grown fairly longer. Her attire now consists of a long sleeveless dark dress held closed by a white obi. She also no longer wears her forehead protector, and sets her hair in a more neat, back-comb style. Karui has dangling earrings in the same colour as her previous ones. In the anime, however, Karui does not wear earrings. Karui seems to have a somewhat comedic negative relationship with her teammate Omoi. During their début, they argued over the possible reasons that the Raikage could have called them. She assumed that he wanted them to get him more protein shakes. However, the argument started with Omoi, implying that she is flat-chested in comparison to their other teammate, Samui. Like the rest of her team, she highly respects Killer B and was steadfast in her pursuit of revenge against Sasuke. Karui is also quite combative, outspoken, stubborn, and impulsive, allowing her emotions to come out, as she angrily yelled at Team Kakashi for allowing the renegade Sasuke to run loose. She came to a violent point when she took out her rage on Naruto Uzumaki and beat him without hesitation,[4] though Omoi later said she felt remorse for doing so. As a mother, Karui seems more laid-back when it comes to her daughter Chōchō's training, questioning the necessity for her to learn techniques in times of peace.